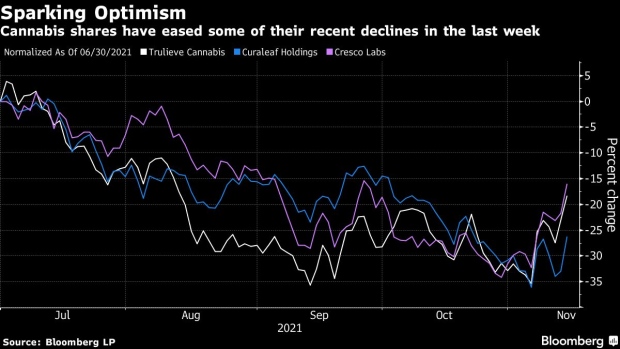 (Bloomberg) -- A Republican bill to legalize marijuana at the federal level in the U.S., expected to be unveiled soon, would have a lighter regulatory touch, lower taxes and fewer provisions to help minorities compared to prior legislative efforts, two people who’ve seen the draft legislation said.

South Carolina Representative Nancy Mace has been reported to be leading the draft. Mace, who has declined to comment when asked about the initiative, has a press conference scheduled for Monday about the proposal. Her legislation follows a bill from Democrat and Senate Majority Leader Chuck Schumer, the Cannabis Administration & Opportunity Act, which hasn’t gained traction.

Those who’ve seen Mace’s draft say it would regulate cannabis more like alcohol. This would be a lighter touch than the more rigorous oversight called for in Schumer’s bill, which critics said would make pot akin to pharmaceutical drugs or tobacco by putting the U.S. Food and Drug Administration in charge of overseeing health and safety issues. The draft, which was also seen by Bloomberg News, hasn’t been finalized and some details could still change.

“It would largely delegate regulatory powers to the existing state governments,” said Brady Cobb, a board member of Captor Capital, an Irvine, California-based operator of dispensaries, who saw the draft. Cobb, the former chief executive officer of Bluma Wellness, is also a lobbyist in Washington pushing for cannabis reform.

Mace’s proposed excise tax is 3.75%, according to Cobb -- a fraction of the 25.5% that Schumer’s legislation would put on marijuana products. Detractors have said the higher tax would make legal cannabis too expensive to compete with products sold on the illicit market and cause problems like those seen in California. There, a so-called legacy market persists alongside licensed and taxed marijuana.

Mace’s bill would let state governments regulate the health and safety of cannabis products and put the Alcohol and Tobacco Tax and Trade Bureau -- an agency under the Department of the Treasury that collects excise taxes -- in charge of federal regulation instead of the FDA.

“The FDA would have had the ability to come in and slow things down,” said Cobb, who said he sees Mace’s legislation as a tighter bill. He added it’s “a common-sense middle ground” between Schumer’s measure, which he called “very aspirational,” and a more conservative previous effort that would have basically left legalization up to individual states.

Another person who has seen Mace’s draft, but asked not to be identified due to the private nature of exchanges over the yet-to-be-unveiled legislation, said it gives oversight to the Alcohol and Tobacco Tax and Trade Bureau, known as the TTB.

That measure is is more likely to result in smaller, craft-style brands. That’s because oversight by the FDA could leave power concentrated with bigger companies that could afford to deal with more layers of regulatory compliance.

The other major difference with Schumer’s proposal is that Mace’s is lighter on so-called social-equity provisions, which are meant to repair harm from the war on drugs by promoting minority participation. Macy’s legislation lacks a fund that would be designed to financially support minorities like the one in Schumer’s proposal.

Cobb said the bill’s logic is that most of the drug arrests were done at the state level. It does offer the opportunity for nonviolent offenders to re-enter society.

Marijuana stocks, which had been beaten down this year largely due to the industry’s stalled political prospects, have rallied all week on anticipation of Mace’s legislation. Since Republicans have largely been the strongest hold-outs in the Senate, investors see Mace’s bill as having the potential to make quicker headway.