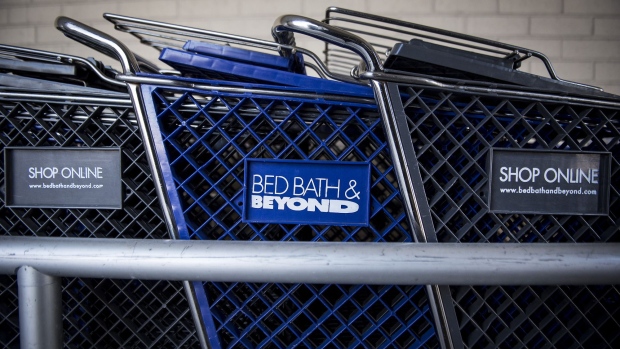 Shopping carts sit outside of a Bed Bath & Beyond Inc. store in Norridge, Illinois, U.S., on Saturday, Dec. 16, 2017. Bed Bath & Beyond is scheduled to release earnings figures on December 20. Photographer: Christopher Dilts/Bloomberg , Bloomberg

(Bloomberg) -- Retail traders are splashing around in the options market again, in what has historically been a bad omen for stocks.

Day traders who have driven outsize gains in the likes of Bed Bath & Beyond Inc. and AMC Entertainment Holdings Inc. in recent weeks have also been piling into calls -- bullish bets that can amplify returns on individual stocks.

For professional traders, the uptick in call buying by the retail set is yet another warning that the surge in stocks since late June might not last. Since 2006, there have been six jumps in speculation by small options traders during period of limited stock rallies, followed by declines over the next three and six months every time but one, according to the latest research from SentimenTrader.

The risks were on display Tuesday, as warnings from chip makers that profits and sales will slow later in the year sent the Nasdaq 100 down 1.2%. Meme darlings like Bed Bath & Beyond got caught in the downdraft, with its shares falling 14% after more than doubling in the previous eight days.

Still, loading up on call options in general has been a winning proposition this earnings season. Traders who bought single-stock calls five days ahead of an earnings release this reporting season have reaped a 38% average return on premium -- the amount paid to receive a call option -- data compiled by Goldman Sachs Group Inc. show.

“If we look at modest weekly rallies in the S&P 500, a gain of less than 1%, then last week marked one of the largest jumps in net speculative volume in 22 years,” Jason Goepfert, chief research officer at Sundial Capital Research said in a note. He warned that the next few weeks will be a true test for traders’ optimism.

Hedge funds are already skeptical that the rally can last, loading up on puts that protect against further declines. The latest surprisingly strong jobs report indicates the Federal Reserve is unlikely to make a pivot from hiking interest rates anytime soon.