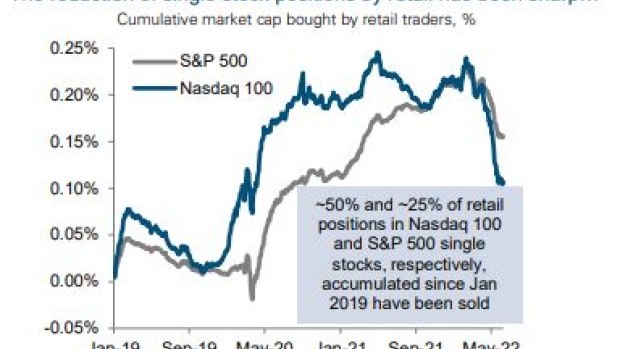 (Bloomberg) -- Stock traders who whipped up the meme craze that took Wall Street by storm last year are furiously rushing to the exits.

Roughly 50% of single-stock retail positions in the Nasdaq 100 and a quarter of those in the S&P 500 that had been accumulated since January 2019 have been sold, according to data from Goldman Sachs Group Inc. In another sign their exuberance has faded, call-option volumes have reversed about 70% of their increases from the start of 2019 to November 2021, when tech stocks and Bitcoin peaked.

“While historically retail investors have bought the dip, this time they haven’t,” wrote John Marshall, head of derivatives research at Goldman Sachs.

Wall Street had been obsessed with how at-home traders were behaving during the pandemic when it came to the market. The boredom-markets-hypothesis -- which postulated that many of those were stuck at home with little to do turned to stocks to fill their time and satisfy their boredom -- became just about settled science. Stocks only go up, the saying went at the time, with indexes notching impressive returns even as the pandemic raged.

Hordes of day traders flooded social-media forums like Reddit and Twitter and fed each other information and trading tips. Their collective efforts famously pushed up shares of GameStop Corp. and AMC Entertainment Holdings Inc., among others, dealing a blow to big-name short sellers who had bet against those stocks.

But the tides have turned and 2022 has offered only rough trading and much gut-wrenching volatility. The gumption among the retail crowd to buy the dip has come to a test, with the strategy not faring as well in a market that’s seen the S&P 500 lose more than 20% and the Nasdaq 100 drop 30% this year. In fact, a retail-investor behavior measure by TD Ameritrade shows they have been cutting exposure to equities all year.

“The way that they’re likely going to be trading going forward is likely selling dips as they try to protect any gains that they may have or reduce further losses,” said Eric Johnston, head of equity derivatives and cross asset at Cantor Fitzgerald. “We can no longer count on the individual investor to be a backstop for this market.”

All manner of investments have lost value in 2022. Among the retail crowd, tech and biotech have been heavily sold, according to Goldman. Meanwhile, a basket of retail-favored stocks tracked by the bank has lost more than 40% year to date, and another made up of companies most frequently mentioned on social-media forums is down roughly 50%. Crypto, another individual-investor favorite, has also been stuck in the gutter.

A key concern for economists, now that the Federal Reserve is working on cooling the economy and inflation, is how the consumer will bear it out. And while a debate rages over the central bank’s ability to engineer a softish landing or over-correct into a recession, even a mild one, consumers have already shown some signs of pulling back. Data this week showed retail sales in May unexpectedly declined for the first time in five months.

Charles Schwab surveyed over 1,000 of its retail clients in April and found that 57% of respondents have a bearish outlook on the U.S. stock market for the second quarter of 2022, an increase of 29% from the same time last year. The primary driver of the negative outlook is the higher cost of living, followed by geopolitical concerns, according to Schwab.

“Consumers are pulling back,” said Chris Gaffney, president of world markets at TIAA Bank. “We’re seeing most investors sit this out, which is probably smart, sitting out the volatility.”

Still, Goldman says retail investors are continuing to put money toward exchange-traded funds, especially and dividend-focused ones, which have seen more than $30 billion of inflows this year.

“There has been a regime shift from the old FAANG megatech names to more defensive, income plays,” said Jane Edmondson, CEO and founder of EQM Capital.