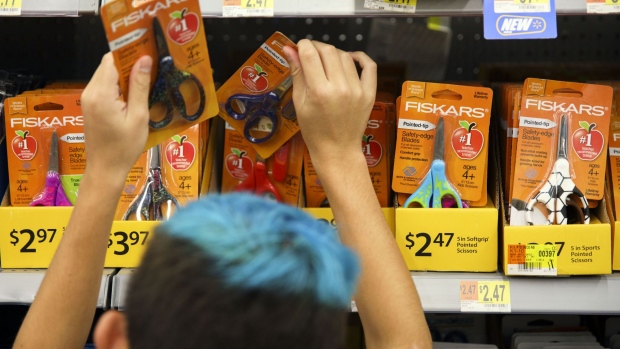 The neon rainbow playground ball is a top seller. Pop fidget pencil cases and journals sold out coast-to-coast in three weeks. Backpacks with dinosaur and mermaid prints are flying off the shelves.

Parents and kids are not only on the hunt for essential back-to-school supplies this year, but unique gear to help kids settle into a new routine, says Mastermind Toys CEO Sarah Jordan.

"Because kids haven't consistently been in school for the past two years, there's a real need for gear to be replaced because it's either outdated or they've outgrown it," she said. "But back-to-school gear is also a form of expression and it's more important this year than ever."

Retailers are banking on a robust back-to-school shopping season as students prepare to return to in-classroom learning -- many for the first time in more than a year.

The lucrative spending period was sluggish last year as some parents opted to homeschool their children and many schools shifted to online learning.

But consumer spending is expected to be strong in the run up to schools reopening this fall.

Many parents and students began stocking up early, and sales of school-related supplies from lunch boxes to sneakers are projected to remain strong into September.

"For many retailers, back to school is a critical period second only to Christmas," said Retail Council of Canada spokeswoman Michelle Wasylyshen.

"This year back-to-school shopping should be huge compared to last year since schools will be returning to in-person at all ages."

In the U.S., the National Retail Federation said consumers plan to spend record amounts for school supplies this fall.

The rosy sales projections are largely mirrored in Canada, with experts noting that the return to in-person instruction, the restart of many extracurricular activities and the return to the office should provide retailers with a big lift.

"It's not that surprising given more students are expected to return to in-person learning," he said. "But the uncertainty with the fourth wave could still impact sales."

Statistics Canada said Aug. 20 that retail sales rose 4.2 per cent to $56.2 billion in June as public health restrictions were eased in many parts of the country.

While the agency said its preliminary estimate for July, which will be revised, showed retail sales fell 1.7 per cent, experts say traditional back-to-school categories like apparel appeared to do well.

Stores have been heavily promoting school sales this month, with mailbox flyers and online ads featuring everything from classroom supplies and apparel to electronics and dorm room essentials.

Many are offering classic doorbuster items to lure shoppers into stores, like a 29 cent pack of wooden pencils at Staples or an 88 cent box of coloured crayons at Walmart.

Retail observers say the aim is to get consumers through the door with steeply discounted items in the hopes they'll spend more on discretionary items and higher margin goods like backpacks, footwear and clothing.

"Apparel is one of the stars at retail right now as we reopen," said retail analyst Bruce Winder.

"We're really seeing apparel rocketing back up now, and that's after seeing sales slip as much as 80 per cent during the height of the pandemic."

Some stores are featuring masks and hand sanitizer as part of their back to school selection. John DeFranco, chief commercial officer of Staples Canada, said the store is featuring sanitation options alongside its usual school supplies.

Electronics remain a bit of a question mark, as many students and families already purchased new technology during the pandemic, retail experts say.

Yet some families appear to be buying cellphones for elementary and high school aged students in order to stay connected, they say.

"There might be a lot of parents interested in buying their children cellphones before the start of school," said Anwar White with McGill University's Bensadoun School of Retail Management.

"They didn't need one last year because they were mostly home, but now they'll be apart more."

Indeed, parental guilt about seeing children cope with pandemic restrictions for 18 months could give an extra boost to back-to-school shopping, he said.

"I would say the majority of parents are going all out," White said. "There's this inherent guilt involved with this removal of a normal experience for children."

"It's a ritual for parents and students that is a sign of stability and reliability," he said. "There's a sort of emotional, therapeutic side."

Still, the "wild card" with back-to-school spending is the Delta variant, Winder said.

"Sales may start to soften if we see COVID-19 cases start to rise again."