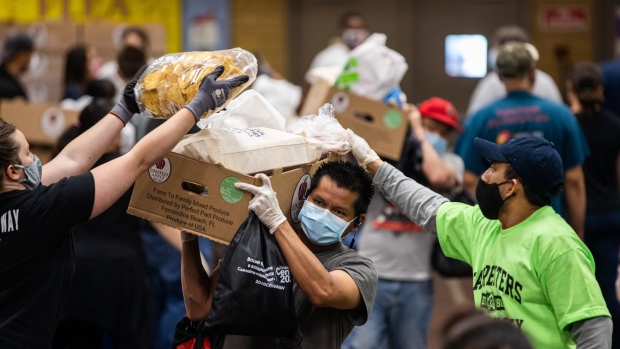 A person wearing a protective mask receives groceries at a Catholic Charities Brooklyn and Queens pop-up food pantry in the Brooklyn borough of New York on May 29. , Bloomberg

(Bloomberg) -- Rich Americans for years have been stockpiling charitable dollars in donor-advised funds, or DAFs. Now the money is starting to flow to nonprofits at a time they desperately need the money.

Clients at Schwab Charitable, the nonprofit arm of Charles Schwab Corp., made $1.7 billion in grants from their DAFs in the first half of 2020, up 46% from the same period in 2019. Vanguard Charitable, affiliated with the Vanguard Group, reported $815 million in grants through June 30, a 37% rise from a year earlier.

At Fidelity Charitable, the largest DAF provider, more than $3.8 billion has been donated from such funds so far this year, according to its website. The nonprofit arm of Fidelity Investments didn’t calculate the change from the same period last year, but in a shorter period of time, from January through April, donations were up 16%.

Covid-19 has put an unprecedented strain on nonprofits. Countless fundraisers have been canceled while demand for services, from food banks to health-care organizations, has skyrocketed. The major DAF providers have been recommending Covid-related charities while also urging donors to maintain support for other nonprofits.

“In a year of such turmoil, it’s inspiring to see how people and nonprofits are coming together to do what they can to make a difference,” Vanguard Charitable President Jane Greenfield said in a statement.

DAFs have become a popular way to give to charity, with assets rising from $70 billion in 2014 to $121 billion in 2018, according to the latest figures from the National Philanthropic Trust. They’ve also attracted scrutiny from lawmakers, nonprofits and philanthropy experts who point out that DAFs offer an immediate tax break, which can equal 57 cents or more of every dollar donated, but no obligation that donated money ever reach working charities.

Some wealthy people and groups have been urging DAF holders to give even more. Former Microsoft Corp. and Amazon Inc. executive David Risher and his wife, Jennifer, started the #HalfMyDAF challenge to provide matching grants to people who donate 50% of the money in their DAFs by the end of September.

On Tuesday, members of the Patriotic Millionaires, a left-leaning group of rich Americans, launched the Crisis Charitable Commitment, an effort to encourage more giving from DAFs, foundations and wealthy individuals.