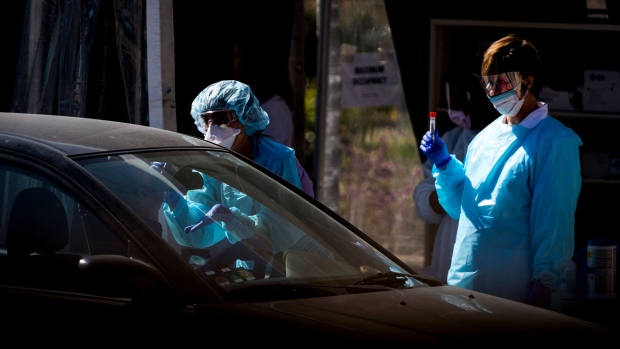 Medical personnel collect a sample from a patient at a drive-thru COVID-19 testing clinic at a Kaiser Permanente facility in San Francisco, California, U.S., on Thursday, March 12, 2020. , Bloomberg News

Nervous basketball stars on a cross-country flight hatched plans to get access to scarce coronavirus tests. The New York and Hamptons elite called in favours to grab medical care. Across the country, ventilator makers fielded calls from people who didn’t care about prices.

As the deadly Covid-19 outbreak spread across the U.S., millions of Americans were forced to choose between losing paychecks or showing up at work despite the health risk. The rich, powerful and connected spent the first 10 days of the pandemic living another reality.

Coronavirus didn’t invent the gulf between the rich and everyone else, it has just exposed gaps that were already there. In the past two weeks, the sick tried and failed to get tested, the nervous watched their retirement savings shrivel, and thousands have already lost their jobs. Money and power, however, have been tickets to comfort and protection.

“The coronavirus loves the inequitable health-care system that we’ve got,” said Arthur Caplan, who directs the NYU Grossman School of Medicine’s program in medical ethics. “The 1% can pull strings,” he said, while millions of people can’t get tested: “It’s wrong, but it’s true.”

Staffers for the Brooklyn Nets boarded a March 13 charter flight from California before the team’s stars and their families got on. The staff disinfected the plane and placed hand sanitizers and masks alongside vitamins in the common area. The NBA had just suspended its season and players were on edge. Some team personnel had coughs and runny noses, so each player was given a piece of paper and asked to write how they were feeling, if they’d been around anyone who was sick, or if they have any family members in a high-risk category.

“Players wanted to be tested. It wasn’t even close,” Nets General Manager Sean Marks said in an interview. “Everybody wanted the testing.”

The private lab told Bloomberg News that it’s only cleared to analyze samples of patients with symptoms of Covid-19, just as the U.S. Centers for Disease Control and Prevention’s testing guidelines prioritize patients with symptoms who are sick, elderly, or have chronic conditions. But many of the basketball players didn’t have symptoms. In a statement, the Nets said the team was fully transparent with the private lab and didn’t “misrepresent the condition of those tested.”

David Morgan, an executive with Eurofins, the lab’s parent company, said the lab wouldn’t do testing without the proper authorization from a health-care professional. “If they put a diagnosis code down for coronavirus infection and send us a specimen, we have to assume the patient falls under the criteria for the testing, which is symptomatic,” he said.

Since then, other NBA teams, including the Los Angeles Lakers, Philadelphia 76ers, and the Boston Celtics, have all received testing for players who exhibited no Covid-19 symptoms.

Around the same time, a 41-year-old insurance consultant in Long Beach couldn’t get a test despite his worsening headache and dry cough.

“I always knew that money gets you better treatment, that’s how money works in this country,” said Matt Friedrichs, the consultant. “It’s just shocking to me that the government did not react quickly enough so that everyone who needs it can be tested.”

One private concierge health service said it has hazmat suits for home visits and personal relationships with virus-testing vendors. A billionaire investor said it would be easy to get his hands on a test if he wanted one, but that the real scramble among the elite in New York is for reserving a hospital bed. The billionaire, who has personal connections to a major New York hospital, said he’d only pull strings for family or his best friend. Inside another billionaire’s Hamptons estate, the worries this week weren’t about life and death: Calls went out for a dermatologist who could provide Botox injections, according to a person in the house.

Ventec Life Systems, which makes portable ventilators, has received hundreds of inquiries from individuals about getting their own. “A lot of folks are asking, ‘Can we buy and how much?’” said Chris Brooks, chief strategy officer at Ventec. “Cost is not something they’re concerned with,” he said. The company does not sell directly to individuals.

In Manhattan, patients have been asking the concierge physician George Liakeas “what kind of access” he can give them in a worst-case scenario. They want to be able to jump the line, he said, but doctors will prioritize ventilators and other resources for the sickest people: “It’s not going to be like in the Titanic, where the wealthy got the lifeboats and the boats are left half empty.”

The outbreak could eventually act as an equalizer, according to Harold Koplewicz, medical director of the Child Mind Institute in New York.

“The way the health-care system has been developed is that if you can pay fee for service, if you are connected, if you are someone who is very philanthropic, clearly the health system can respond differently to you,” Koplewicz said. “When you’re in this kind of war-like mentality, whether or not you’re a donor or a board member or a very important person, I don’t think it’s going to change the fact that someone who is sicker than you will be triaged ahead of you.”

At a briefing this week, President Donald Trump said the rich and connected shouldn’t jump to the front of the health-care system’s line. “That does happen on occasion, and I’ve noticed where some people have been tested fairly quickly,” he said. “Perhaps that’s been the story of life.”