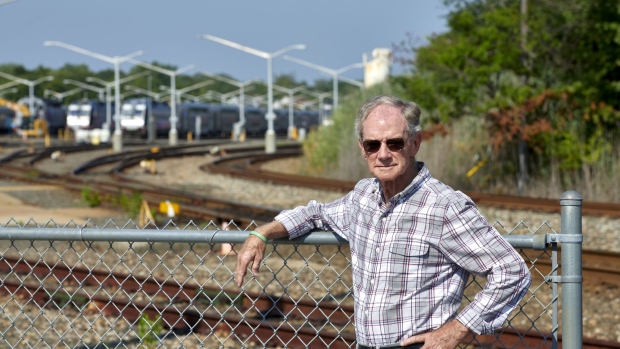 (Bloomberg) -- A project to end increasing rounds of flood damage is pitting New Jersey Transit against an oceanside enclave of multimillion-dollar homes.

Bay Head, where billionaire philanthropist Peter Kellogg learned to sail as a kid, is the last stop on the North Jersey Coast Line that runs about 70 miles north to Manhattan. It’s also the site where NJ Transit, the nation’s largest statewide commuter-transportation provider, is spending $32 million to rebuild a power station damaged by Hurricane Sandy in 2012.

But town officials and some residents want no part of an effort to boost trains used more by summer visitors than themselves. Opponents cite the construction’s potential to contaminate Twilight Lake, which feeds Barnegat Bay, the state’s largest inland waterway. And while Governor Phil Murphy -- a regular at the upscale Charlie’s of Bay Head restaurant on the lake’s edge -- calls for 50% clean energy statewide by 2030, the project will leave the town’s trains still relying on diesel fuel.

“You have a governor who’s opposed to fossil fuels and meanwhile, they have a train that’s polluting the environment,” said beachfront homeowner Lawrence E. Bathgate II, 82, an attorney and former finance chairman of the Republican National Committee. “It’s as if we’re second-class citizens.”

In many oceanfront U.S. towns, wealthy homeowners are under increasing pressure to limit coastal damage. This year alone in California -- where the U.S. Geological Survey model predicts sea-level rise of as much as 6.6 feet (2 meters) by 2100 -- the owners of an $11 million Laguna Beach house were ordered to dismantle a seawall that opponents said was eroding the beach. Along Highway 1 in Stinson Beach, residents for years have been fighting a proposal to block home-improvement permits.

In New Jersey, Murphy, a 63-year-old Democrat running for re-election in November, on July 19 referred questions about Bay Head to his staff. Jim Smith, an NJ Transit spokesman, said that adding electrical lines and doing away with diesel locomotives would be cost-prohibitive and introduce safety and reliability risks.

“This project is integral to the day-to-day operations of the North Jersey Coast line,” with 22,800 average daily riders pre-pandemic, Smith said in an email.

At its July 21 meeting, NJ Transit’s board approved an updated capital-plan proposal to test battery-powered locomotives along the line. The railroad, though, lacks the necessary $46 million in funding.

“It makes a lot of sense to get rid of diesel,” regular rider Eileen Murphy, of Brick, said on July 22 as she awaited a northbound train at the Bay Head station.

Bay Head’s business association describes the town as “a quaint country village by the sea.” The town has a population of less than 1,000, a median household income of $103,571 and a median housing value of $1.2 million.

While neighboring Point Pleasant Beach courts vacationers with motels and boardwalk thrill rides, Bay Head’s version of a crowd is the queue for Mueller’s bakery crumb cake. Seaside Heights, several towns to the south, had six seasons of nightclub escapades by Snooki and her MTV’s “Jersey Shore” co-stars. The Bay Head Yacht Club, where tennis whites may not be worn in the dining room, hosts regattas for single-masted catboats.

Whatever Bay Head lacks in typical New Jersey shore culture, though, it shares the constant threat of climate change with its neighbors on a fragile 20-mile-long (32-kilometer) barrier island. Flooding from Sandy, in 2012, turned a half-dozen municipalities into a disaster area that was rebuilt with hundreds of millions of dollars in federal aid. Since then, increasingly frequent nor’easters and other storms have caused flooding and beach erosion, prompting sand replenishment and other steps by the U.S. Army Corps of Engineers.

Most of the shore welcomes such interventions to protect tourism, which generates more than $5 billion annually in state and local tax revenue. Bay Head, though, tends to get touchy when government rolls into town with big ideas.

After Sandy, homeowners in Bay Head and neighboring Mantoloking mounted an unsuccessful five-year legal challenge to prevent the construction of dunes on oceanfront property protected by their privately owned seawall. The plaintiffs’ legal cost exceeded $1 million, according to Bathgate, who helped pay the bill.

Beachfront homeowners were stung earlier when the state Supreme Court, in a landmark 1984 decision, ruled that the quasi-public Bay Head beach association had no right to reserve the oceanfront for residents’ exclusive use. The association today maintains some of the strictest rules along the Jersey shore, prohibiting food and beverages on the beach except for water in clear containers.

Summertime passengers push Bay Head’s daily boardings to about 286, double the off-season figure. The new elevated substation, with a completion date in late 2023, will provide steady electricity to the rail yard, ultimately benefiting all the line’s riders, NJ Transit says.

Mayor Bill Curtis, in an interview, said the town had spent around $200,000 challenging the plan. Bay Head got design concessions, but its greater concern is the pumping of millions of gallons of water into Twilight Lake and the Barnegat Bay -- keeping the construction area dry but potentially disturbing fuel and other contaminants spilled decades ago.

“It’s just unnecessary,” said Curtis, 78, a Republican and mayor for 14 years. “They’re not willing to do anything to assist the residents of Bay Head.”

Save Barnegat Bay, a non-profit group working to reverse decades of environmental damage, in a lawsuit claims that the project lacks wetlands permits and has disturbed nesting ospreys and other wildlife. Twilight Lake and the bay “are entitled to the highest protections of the Clean Water Act and New Jersey laws,” according to the lawsuit, filed on June 24.

“Maybe someone can explain why they have to idle trains 24-7, spewing exhaust into the atmosphere,” Luca Zanin, 50, of Santa Rose, California, a winery owner and summertime Bay Head resident, said in an interview.

In Ocean County Superior Court on July 20, Save Barnegat Bay failed to win a temporary stop-work order. The matter next comes up in August.

“The picture is far bigger than Bay Head,” Michele R. Donato, an attorney for the group, said in an interview. “We’re at a pivotal point of where we stand with climate change and the impacts we are now seeing.”