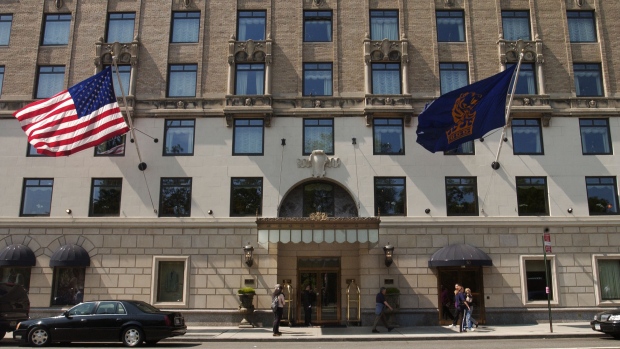 (Bloomberg) -- The owners of the Ritz-Carlton New York, Central Park are exploring a sale after receiving interest from at least two buyers, according to people familiar with the matter.

Owners Westbrook Partners LLC and Korea Investment Corp are in discussions with Qatar’s Katara Hospitality and Trinity White City Ventures about a potential sale of the 259-key hotel, said the people, who declined to be named because the talks are private. The would-be buyers have sought opinions from appraisers and other service providers, the people said. A representative for Trinity White City Ventures declined to comment. A Westbrook representative didn’t immediately have a comment, while representatives for KIC and Katara also didn’t immediately respond.

The owners of the Ritz-Carlton, one of the priciest hotels in Manhattan, are seeking $600 million, said one of the people. At least one potential buyer is weighing a plan to convert and sell some floors of rooms and suites as residential condominiums. The scope of that plan could be restricted if the New York City Council extends a temporary ban on hotel condo conversions.

The law, first passed in 2015 and extended two years later, bars hotels from converting more than 20% of their rooms for other uses. The current moratorium expires in June.

The Ritz-Carlton’s bidders have faced off before. Trinity White City Ventures, the family office of Shahal Khan, was behind an aborted attempt to acquire New York’s iconic Plaza Hotel last year. The $600 million deal fell apart amid a series of lawsuits over the sale process, and the historic property was eventually sold to Katara.

Westbrook, founded by Paul Kazilionis, acquired its stake in the hotel in 2012 for $198 million, according to Real Capital Analytics. An affiliate of Goldman Sachs Group Inc. last year bought a minority stake in Westbrook. Korea Investment Corp., South Korea’s $103 billion sovereign wealth fund, acquired a stake in the property in 2016, according to the Korea Times.

The owners went on to begin the first phase of a renovation in November, updating guest rooms, club lounge, and spa, and launched a second phase in January.

New York City hotels have been especially hard hit by a nationwide slowdown in room demand. Revenue per available room, or revpar, fell 10% in March from the year before, according to lodging data provider STR. The luxury segment performed even worse, with revpar dropping by almost 17%.

Booking a room for Wednesday night with one king-sized bed and access to the club lounge would cost $1,365, according to Marriott’s website.