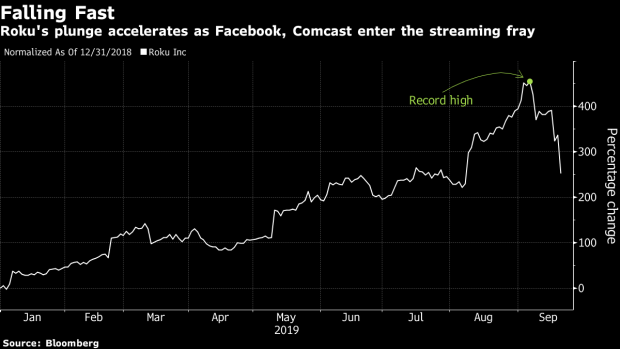 First it was Facebook Inc. showing off a new model of its Portal video chat device that can be connected to a TV and has access to Amazon.com’s streaming service. Then Comcast Corp. offered a device for its internet-only customers. By the end of the week Roku’s stock had fallen by 27%, wiping out roughly $5 billion of shareholder value.

The selling peaked on Friday after Pivotal Research Group started coverage of Roku, advising investors to sell the stock on the prospect of even more competition. Analyst Jeffrey Wlodarczak also established a $60 price target for the shares, the lowest on Wall Street and a level that implied a decline of 55% from Thursday’s close.

“We see dramatically more competition emerging that will likely drive the cost of OTT devices to zero and put material pressure on advertising revenue splits, highlighted by Comcast’s recent moves with its free Xfinity Flex product that is likely to be copied by other distributors,” he wrote in a research note.

Wlodarczak’s bearish view makes him an outlier on Wall Street, where most analysts recommend buying the stock. Even after this week’s sell-off, Roku is the best performer in the Russell 1000 Index this year, with gains exceeding 250%. The company’s sales are being driven by advertising in its streaming platform and are expected to expand 48% to $1.1 billion this year. That’s an acceleration from 2018.

The promise of growth that has attracted investors to the Los Gatos, California-based company also drove its stock to lofty valuations. Shares sold on Friday for 11 times projected sales. Netflix Inc.’s price-to-sales multiple is 5.9.

Roku bulls rushed to defend the company. Needham analyst Laura Martin called it “the gold-standard pure play” of video streaming, one that was “underscored by flawless (our word) execution” and a continually expanding total addressable market.

“Even if Roku’s hardware sales went to zero TOMORROW,” the financial downside “would be minimal” as it accounts for just 5% of its gross profit, Martin wrote.

Competitive pressures could continue next week when Amazon.com Inc. is set to unveil new services and devices.

Investors should expect Amazon on Wednesday to introduce a new lineup of FireTV-enabled products, which could boost competition with Roku-enabled TVs, according to Lynx Equity Strategies.

“We would stay on the sidelines,” analysts K.C. Rajkumar and Jahanara Nissar wrote in a research note. “Depending on the response to the Amazon launch, we will then take another look at the stock and see if it is time to step in on the long side.”

To contact the reporters on this story: Jeran Wittenstein in San Francisco at jwittenstei1@bloomberg.net;Ryan Vlastelica in New York at rvlastelica1@bloomberg.net

To contact the editors responsible for this story: Catherine Larkin at clarkin4@bloomberg.net, Richard Richtmyer, Rob Golum