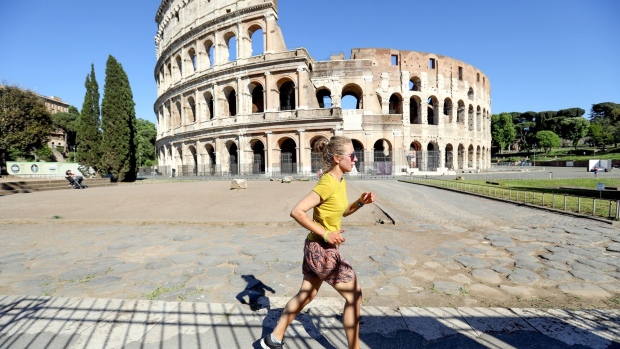 A jogger passes the Colosseum in Rome, Italy, on Monday, May 4, 2020. With Italy still in the throes of Europe's deadliest coronavirus outbreak, more than 4 million people are cleared to return to work on Monday. , Bloomberg

(Bloomberg) -- The Colosseum, ancient Rome’s most iconic monument, may add about 1.4 billion euros ($1.4 billion) to Italy’s gross domestic product every year, but its overall value is much higher than that.

Deloitte LLP estimates that the Colosseum’s “social asset value,” or the intangible value that Italians place on its mere existence, is around 77 billion euros ($79 billion).

“This value is perceived by most Italians, and not just those who visit it,” the consultancy said in a report published Monday.

While calculating the economic contribution of the Flavian Amphitheater, as the Colosseum is officially known, is easy enough — add the direct value of tickets sold to an estimate of the impact its visitors have on other businesses — determining its value is anything but.

Deloitte draws up its evaluation on the basis of a survey asking people how much they are willing to pay to preserve an asset or service, even though they make “no direct use of it, may not benefit even indirectly from it, and may not plan any future use for themselves or others.” Citizens of Rome on average pledged 90 euros each, while other Italians went for 57 euros.

The Colosseum is Italy’s most visited monument, attracting about 7 million tourists in 2019. The Tod’s Group financed a 25 million-euro restoration of the monument in 2011-2016.