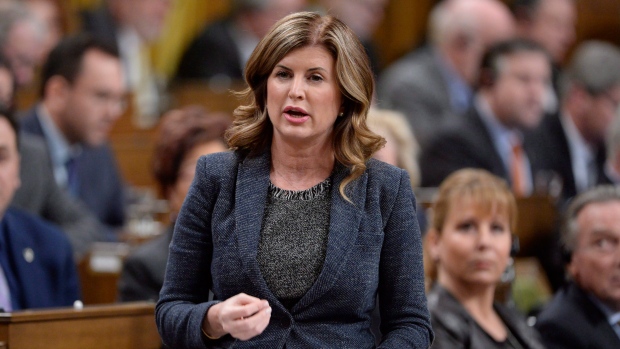 OTTAWA - Rona Ambrose, the former Alberta MP and interim party chief who had been the favoured leadership candidate of many Conservatives, won't seek the party's top job.

Her decision to not run was announced Wednesday in a statement accompanied by a video showing her feet planted firmly somewhere she'd rather be: the mountains.

A love for Alberta and her work advocating for the energy sector and on sexual-assault law training for judges takes precedence over politics, she said.

“I loved my 13 years in public service as an MP, minister and especially as leader of this great party,” she said.

“But right now, I am focused on making a difference through the private sector.”

Ambrose became interim leader of the Conservatives after the party lost government - and leader Stephen Harper - in 2015. She had held several cabinet posts in the Harper government but it was as interim leader that she gained a truly national profile.

Her popularity was such that some members of the party even sought to change the rules so that she could leapfrog from her post as interim leader right into the permanent job.

But that ultimately failed, and Andrew Scheer won the 2017 leadership campaign.

He resigned in mid-December under heavy pressure linked to the Conservatives' loss in the fall election.

Ambrose's name immediately surfaced anew as a possible replacement. She had the backing of many grassroots members of the party and also those higher up, including Alberta Premier Jason Kenney, once a cabinet colleague of hers.

“It is humbling to be considered at all - because I love our party, I love the people in it and I love our country,” she Wednesday.

“I have really struggled with the decision to return to political life.”

Ambrose is on the boards of several private companies and was on the Liberal government's panel advising on the new U.S.-Canada-Mexico trade deal.

She's also been an outspoken advocate for including more women in the corporate and political sectors.

Her decision not to run was not entirely unexpected; many other contenders have spent weeks making calls to shore up the support and campaign teams they will need to mount bids and some Conservative organizers had said they were surprised Ambrose didn't appear to be doing that.

In her statement, she laid out her own vision for what kind of leader the party ought to rally around.

“I know we will choose a strong, compassionate person to lead us - who supports all families, a leader who unleashes the potential of the private sector and Canadian ingenuity through low taxes and less regulation, who defends universal human rights and principled foreign policy,” she said.

Among the only public comments Ambrose had made on the outcome of the 2019 election, and Scheer's fate, was to endorse an essay written by two Conservative strategists calling out the party's failure to actively support LGBTQ rights, including, but not limited to, Scheer's refusal to march in a gay-pride parade.

Ambrose said Wednesday the next leader needs to understand what comes with the job.

“We need to choose a leader who understands the job is about serving - serving all Canadians and making their lives, their country and their world a better place to live. I know we'll choose a good leader and I'll be there to support her â€¦ or him!”

For now, there's only one woman in the race: Ontario MP Marilyn Gladu.

Ambrose's announcement that she will stay out comes as others continue to lay the groundwork for their own bids.

On Wednesday, a rookie Conservative MP from Ontario, Derek Sloan, announced he intends to run, as did Alberta businessman Rick Peterson. He'd once sought to run for the Tories in Ambrose's old Edmonton-area riding, but failed to win the nomination.

He said he had hoped to just support Ambrose, but once it appeared she was not running, decided to get his own campaign off the ground.

The West needs to have a candidate in the race, Peterson said.

“The Conservative Party of Canada - its grassroots are in the west,” he said.