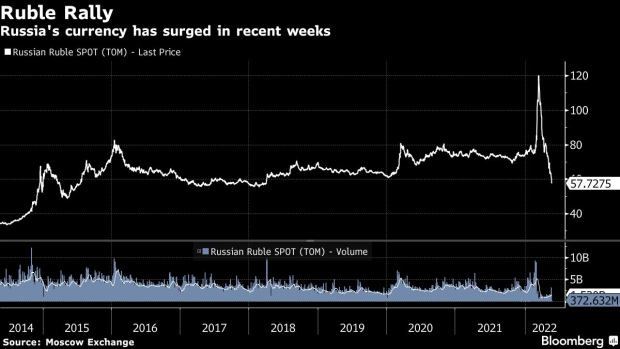 Shoppers pass the State Historical Museum, right, and the GUM luxury department store on Red Square in Moscow, Russia, on Wednesday, Feb. 23, 2022. U.S. President Joe Biden's debut set of sanctions on Russia for its actions over disputed Ukrainian territory hit markets with a whimper and were quickly criticized as limited in scope. Photographer: Andrey Rudakov/Bloomberg , Bloomberg

(Bloomberg) -- Russia’s currency extended a rally that’s taken it to the strongest level versus the dollar in four years, prompting a warning from one of President Vladimir Putin’s staunchest allies that the gains may be overdone.

The ruble was stronger for a fifth day against the dollar, trading up as much as 2.2%, even after Russia on Monday loosened capital controls by reducing the amount of foreign currency exporters are required to convert.

The Russian currency is by far the best performer globally this year with a gain of about 30% against the dollar. But its recovery since the invasion of Ukraine has been so rapid that economists are warning that the appreciation will batter budget revenue and hamper exporter competitiveness.

“The ruble is strengthening at a crazy pace -- We need to be careful not to overdo it,” Belarus President Alexander Lukashenko quipped at a meeting with Putin on Monday.

Still, he added that while the gains had baffled Western nations, they were expected by Belarus and Russia and that this would be a “time of opportunity” for their economies.

The ruble’s surge on Monday triggered a decision by the central bank to allow exports to convert 50% of their revenue rather than 80%, an emergency measure introduced as part of the capital controls after the invasion to protect the ruble.

Now those restrictions are looking like a serious impediment.

Combined with a collapse in imports amid the sweeping sanctions the US and its allies imposed on Russia, they’ve eradicated demand for foreign currency just as dollars and euros pour in due to high prices for largely unsanctioned energy exports.

Even Monday’s changes are unlikely to have much impact, according to ITI Capital analyst Iskander Lutsko.

“Due to low liquidity on the currency market exporters actually sell no more than 50% of currency from export transactions” already, he said.

“In the current environment, it is extremely difficult for the central bank to develop measures to stimulate demand for currency due to restrictions on currency purchases by individuals and falling imports,” Lutsko said.

He predicted the ruble will trade in a range of 60-65 per dollar near-term, before weakening to between 65 to 75 per dollar by the start of the third quarter as seasonal demand for Russia’s energy exports eases.