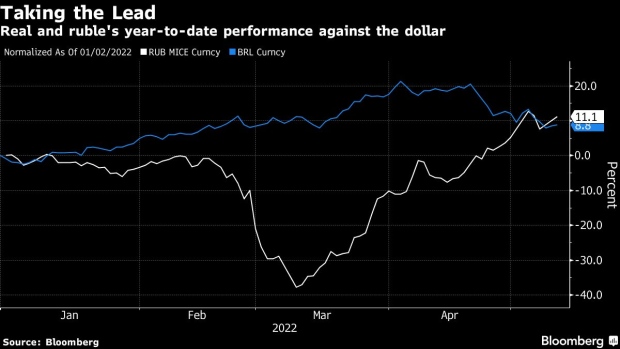 (Bloomberg) -- Capital controls imposed by Russia have turned the ruble into the world’s best performing currency this year, though not many people can pocket a profit on the rally.

The ruble resumed its advance against the dollar on Wednesday as the Moscow Exchange reopened after two days of public holiday. It’s now up more than 11% against the US dollar since the start of the year, surpassing the real’s 9% advance to become the top gainer among 31 major currencies tracked by Bloomberg. The offshore rate is up even more, about 12%.

The ruble’s gains result from a series of measures taken by the government to defend the battered currency in the aftermath of Western sanctions. On top of imposing capital controls, Russia has forced exporters to sell foreign-exchange and is demanding its natural gas be paid for in rubles. Strategists say the rally isn’t credible as many currency-trading shops have stopped dealing in the ruble on the grounds that its value seen on monitors is not the price it can be traded at in the real world.

Still, the irony of the ruble performing so well while at war is remarkable, especially as other countries that imposed capital controls in the recent past have not achieved the same results. Turkey and Argentina tried similar measures when they faced a horde of sellers in the past few years with disastrous consequences for the lira and the peso, which reached fresh all-time lows and never recovered.

The ruble took over from the real as the world’s best performer as the end looms for Brazil’s monetary tightening, which is weighing on the currency. After raising the benchmark rate by 1,075 basis points since early 2021, policy makers in the Latin American nation have signaled a slowdown in the pace of hiking, as well as their intention to wrap up the cycle soon. While the real’s carry will remain high, the spread to US rates will likely shrink as the Federal Reserve keeps raising borrowing costs at an aggressive pace.