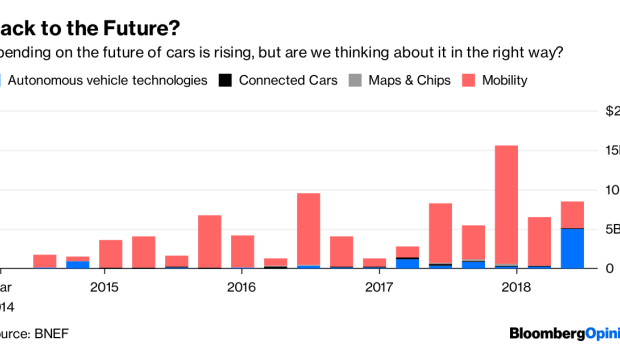 (Bloomberg Opinion) -- People have been imagining driverless cars since at least 1958, when Walt Disney Co. aired “Magic Highway U.S.A.” It's been almost five decades, and we’re still talking about them.

Initially, evolution in transport had been a product of necessity: As we moved from horse-drawn carriages to horseless ones, from steam engines to internal combustion, each development improved distance and speed. Then came luxuries like comfort and fuel-efficiency.

Driverless cars could become more convenient than conventional rides, but will they ever be viewed as necessities? Depends whom you ask. At an event in Hong Kong earlier this year, Carlos Ghosn, chairman of Nissan Motor Co., said the commercial benefit of automated vehicles is huge. Removing the driver reduces a company’s cost of goods by as much as 90 percent, he said.

Ghosn also acknowledged a big barrier to innovation: regulations and clearing any obstacles they raise before mass-marketing. This is more than just a caveat. Legal questions from traffic rules to liability in an accident ultimately will determine whether consumers  — be they big corporations or individuals — decide if they can live with driverless cars, or can’t live without them.

With autonomous vehicles, decades-old traffic rules become ambiguous. Take, for instance, the 1968 Vienna Convention on Road Traffic — a widely accepted international treaty to unify regulation. A key tenet is the responsibility of the driver. Without one, who’s at fault for an accident? The carmaker? The manufacturer of the part that fails? The owner?

History shows that most transport-related regulation has been reactive. In 1965, it was Ralph Nader’s book “Unsafe at Any Speed” that helped put safety front and center for the American car industry. Decades later, Volkswagen AG’s diesel-emissions scandal forced a rethink about regulatory oversight. Seat belts improved only after a neurologist studied the rise of head injuries coming into emergency rooms and basic seat-belt design. That eventually underpinned legislation around safety standards.

Every time a bill comes up for debate or a new law passes, the transportation industry is hit by rising expenses, and must adjust to changing regimes. For instance, carmakers complained the latest set of European fuel-emissions rules — the Worldwide Harmonised Light Vehicle Test Procedure — would increase costs, and aggressively sold non-compliant models before the rules kicked in.

Last in a series on the future of transport. Read more:

Semi-autonomous vehicles have already caused multiple fatalities. (It’s ironic that testing continues with human safety drivers who can take over if the machine malfunctions.) Yet the international response is scattershot.

In the U.S., the National Highway Traffic Safety Administration has put out guidelines on automated driving systems and American states have started passing laws. But all differ on basic issues. Meanwhile, China has been developing its own set of rules and handing out test licenses. Germany’s laws require a driver behind the wheel at all times.

Meanwhile, the existing regulation on cybersecurity is far from sufficient. China’s NIO Inc. — which has marketed itself as a smart and connected vehicle, as we’ve written — could face such problems. This affects the likes of Nissan, too. “We [carmakers] cannot guarantee a car is not going to be hacked. It’s impossible,” Ghosn said. Manufacturers can make them “painful to hack,” but only the government can say whether a car is acceptable.

Yet companies continue to plow billions into these technologies.

“There are plenty of very sensitive questions that need to be answered by the regulator before these cars go on the market,” Ghosn also noted. With more than two-thirds of the global population expected to live in urban areas over the next three decades, it will be important to have a framework in place if the driverless dream turns into reality.

As technology pushes carmakers into uncharted territory, the industry and its regulators have a lot of work to do to prepare for risks both known and unknown.