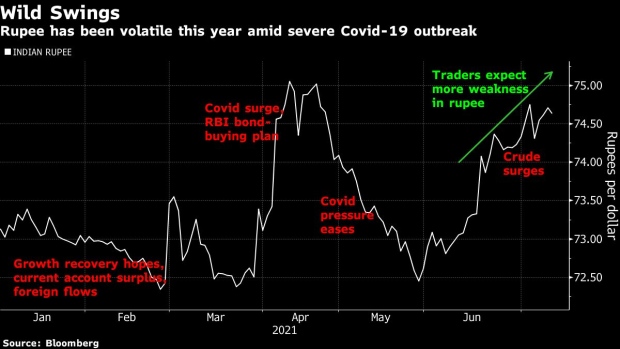 The portrait of Mahatma Gandhi is displayed on an Indian 2,000 rupee banknote in an arranged photograph in Bangkok, Thailand, on Wednesday, Sept. 12, 2018. India's rupee dropped to a record low before trimming last week's loss; the government unveiled measures to prop up the sagging currency, including steps to facilitate bond issuance by local companies and possible curbs on imports. Photographer: Brent Lewin/Bloomberg , Bloomberg

(Bloomberg) -- After months of wild volatility in the rupee, India’s widening trade deficit and elevated commodity prices are bearing down on the currency, reinforcing a recent downward bias and pushing it toward a new low for the year.

That’s the view of traders who’ve seen the rupee whipsaw from being Asia’s best performer in the first quarter to its worst in April when another wave of Covid-19 infections took hold.

This volatility and the prospect of tapering by the Federal Reserve have also reduced the attractiveness of India’s currency for carry trades, adding to its headwinds.

“We expect oil and broader commodity complex prices to remain elevated in the short term, which will weigh on India’s trade balance,” said Standard Chartered Plc’s Parul Mittal Sinha. “We maintain a bearish view on the rupee,” said Sinha, who heads the bank’s India financial markets and macro trading for South Asia.

Standard Chartered and RBL Bank Ltd. forecast the currency to depreciate to 76 per dollar by year-end, while their peers at Deutsche Bank AG have a slightly less pessimistic projection of 75.

The rupee closed at 74.6350 on Friday while Brent crude, the benchmark for India’s oil imports, was around $76 per barrel, up more than 45% since the start of the year.

Read: How Covid Unraveled Decades of Economic Progress in India

Amid the devastating human toll that the coronavirus is taking in India, the rate of increase in new infections is slowing, which is improving the prospects for reopening the economy. But as the Covid curve flattens and consumers and businesses become more active, demand for imports is also set to increase, weighing on the currency.

Updated trade data due Thursday are expected to confirm the deficit widened to $9.4 billion in June, from $6.3 billion in May. Kotak Mahindra Bank Ltd. estimates that billion dollar deficits will continue and average in the “double digits” as the economy reopens.

Technical indicators also point to further depreciation of the currency given dollar-rupee’s moving average convergence-divergence gauge, a measure of momentum, remains above zero in bullish territory. The pair has room to run before reaching resistance at April’s peak of 75.3362.

Yet even RBL Bank’s domestic markets head Anand Bagri, who expects the rupee to weaken, sees pockets of support for the currency, including inflows for equity offerings.

Notable among these is a $1.3 billion initial share sales from Zomato Ltd., and Paytm’s bid for shareholder approval of a $2.2 billion stock sale that would set in motion the process for the country’s largest ever debut.

The Reserve Bank of India also has $600 billion of currency reserves to draw on to curb any sharp fall in the rupee.

‘”We expect the RBI to remain proactive with its FX intervention strategy to ensure limited volatility in the rupee and to prevent excessive rupee depreciation from feeding into inflation,” said Kaushik Das, chief India economist at Deutsche Bank.