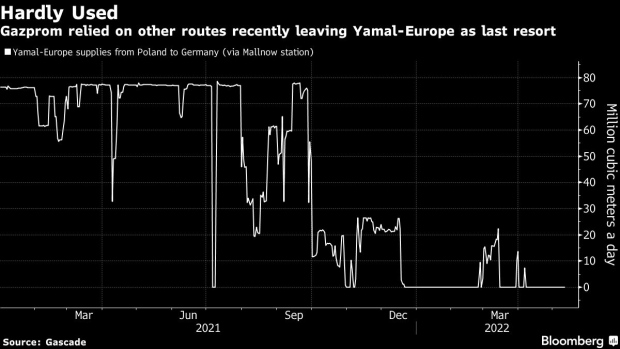 (Bloomberg) -- Russia has banned Gazprom PJSC from shipping gas to Europe through the Polish section of the Yamal pipeline in retaliation for international sanctions, potentially putting the continent’s energy security further at risk.

The government decision, published Wednesday, prohibits Gazprom from any cooperation with EuRoPol GAZ, which owns the Polish section of the pipeline, just as Europe is already facing reduced Russian deliveries via Ukraine. The Yamal-Europe pipeline, barely used this year, has been seen as a potential alternative route in case Russian transits via Ukraine stop during the chaos of war.

Adding to the market’s concerns, Gazprom has already halted supplies to Gazprom Germania GmbH and its units in Germany in compliance in retaliation for Europe’s penalties over the war in Ukraine. On top of the German standoff, shipments to Europe via Ukraine were curtailed on Wednesday after a key cross-border entry point was put out of action because of troop activity on the ground, according to Kyiv.

Russian sanctions come just two weeks after Gazprom halted supplies to Poland and Bulgaria, after the countries refused to pay rubles for the deliveries, and demonstrate that Moscow won’t shy away from further squeezing the largest market for its gas.

Europe, together with its allies, including the U.S. and the U.K., has imposed a wide range of sanctions targeting Russia in a move to stop the war in Ukraine. While the continent, which last year depended on Russian gas for some 40% of its consumption, can’t quickly wean itself off Gazprom’s deliveries, the European Union is considering a ban on Russian crude and oil products.

Poland is prepared to cope without reverse flows from Germany via the Yamal pipeline amid Russian counter-sanctions, Climate Minister Anna Moskwa said.

“For now we have no signal from Germany that the reverse flows would be cut off, but these volumes are contracted daily,” she said speaking in Warsaw. Poland’s PGNiG could not provide an immediate comment.

The retaliation move could curtail some 3% of Russian gas imports to Germany, according to the nation’s Economy Minister Robert Habeck.