Russia is once again sharply reducing the flow of piped gas to Germany, reminding Europe of the daunting challenge the continent faces to build up its energy stockpiles before winter.

Gazprom PSJC will cut shipments on the Nord Stream pipeline -- the main gas link to the European Union -- to about 20 per cent of its capacity from 7 a.m. Moscow time on Wednesday, the Russian gas giant said in a statement. Maintenance issues with a turbine that helps pump gas into the link are behind the curbs, it said.

There’s no telling how long the cuts will remain in place, a troubling prospect for the EU as the clock starts to tick down toward the colder months. The continent’s energy crisis -- exacerbated by Russia’s invasion of Ukraine and resulting sanctions -- risks inflicting severe economic pain on the bloc, with the rationing of energy a possibility as costs soar.

Only one major turbine at Russia’s Portovaya compressor station, which feeds the line, remains in working condition, based on Gazprom’s statements. Normally it’s six. One replacement component has gotten caught up in international sanctions and is now stuck on its return. And others, still in Russia -- including the most recent one -- need to go to Canada for maintenance.

“As long as the returning turbine has no problems, this reduction should be temporary -- but if all of the other major turbines need to be returned to Canada, then it’s a race against time to ensure that flows can be ensured as we approach the winter,” said Jonathan Stern, a distinguished research fellow at the Oxford Institute for Energy Studies.

The return of the unit currently in transit back to Russia would allow flows at 40 per cent of capacity, according to President Vladimir Putin. That’s the level of the pipeline both before and after scheduled maintenance earlier this month.

Europe’s gas markets were jolted by the news on Monday, with benchmark gas prices surging as much as 12 per cent. Futures are already at seasonal records. A further cut to Russia’s supplies to Europe could mean additional cuts to gas consumption, with some industries reducing output or shutting facilities altogether.

If Nord Stream flows are cut off completely, and if the winter is cold, Europe’s gas in storage may run out by the end of February, consultant Wood Mackenzie Ltd. said this month. Prolonged curbs, and low storage levels by next spring would also mean another rush to stockpile next summer -- and maybe an even worse winter next year. 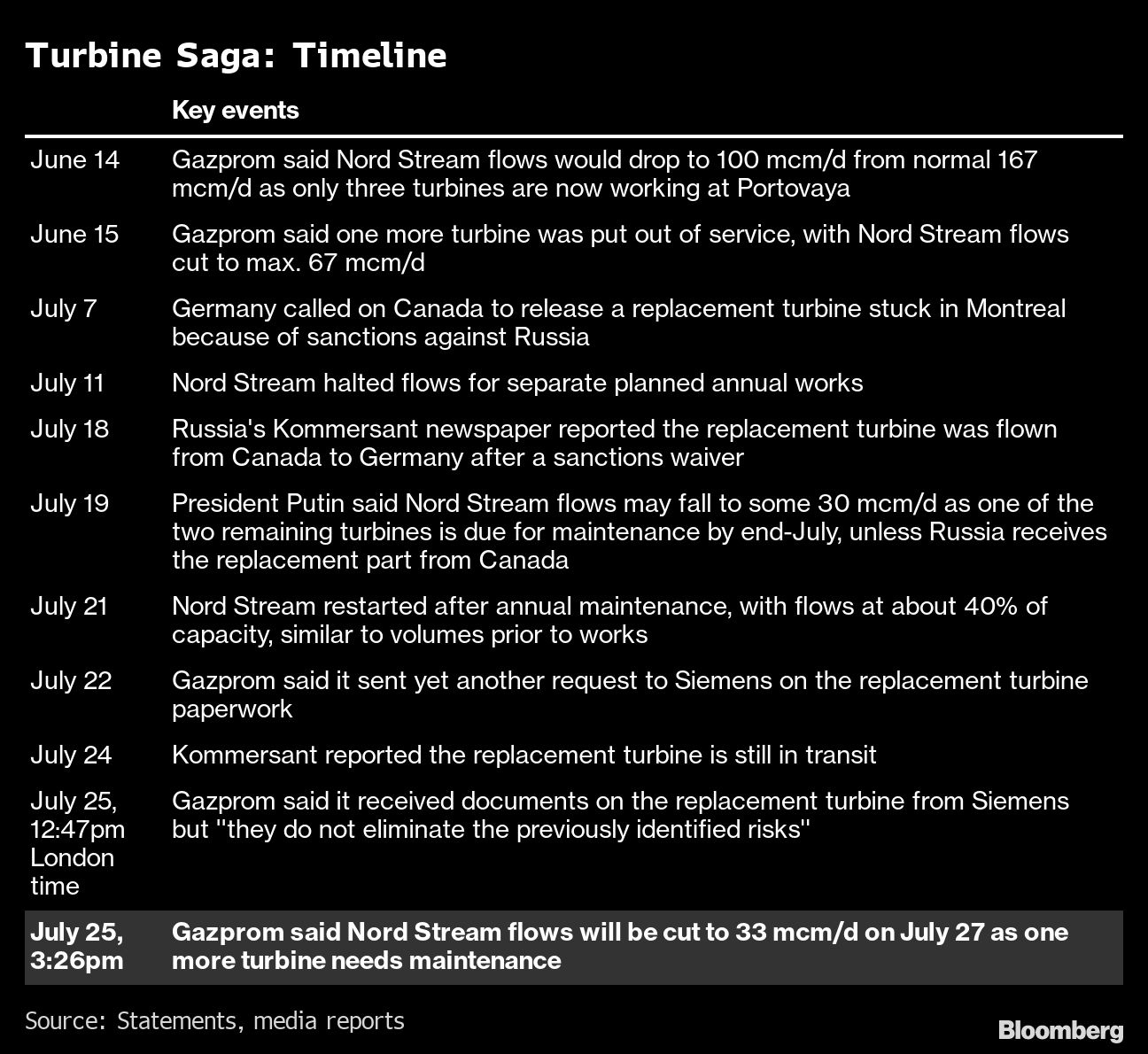 A spokeswoman for Germany’s economy ministry said Monday the government is “monitoring the situation very closely” together with the Federal Network Agency. “According to our information, there is no technical reason for a reduction in deliveries” of gas, the spokeswoman said by email.

Any additional reduction in flows could derail Germany’s stockpiling campaign just as it raised it storage targets. It’s intermediate goal is to ensure a 75 per cent fill level by Sept. 1.

European Commission President Ursula von der Leyen has asked all EU member states to participate in the effort to save gas regardless of how dependent they are on Russia for the fuel.

Putin last week warned that Nord Stream flows could diminish if a spat over its turbines isn’t resolved.

Gazprom cut Nord Stream supplies in two steps last month, citing issues with turbines at the Portovaya station. The company has said that those issues were caused by delays in repairs by Siemens Energy AG amid international sanctions, and the shutdown of some equipment following orders from Russia’s safety regulators.

Earlier Monday, Gazprom said there were still sanctions-related issues around the turbine now on its way back to Russia -- even though Siemens had provided the company with some paperwork -- as well as around the other units that need to be repaired.

Siemens said the missing turbine that Russia blames for limiting the capacity on the Nord Stream pipeline can be delivered right away and that it’s up to Russia to provide missing customs documents.

Despite the turbine spat, Russia is “not interested” in a complete cutoff of its gas deliveries to Europe, Kremlin spokesman Dmitry Peskov said earlier on Monday. However, “if Europe continues its course of absolutely recklessly imposing sanctions and restrictions that are hitting it, the situation may change,” he said.

Gazprom has already declared force majeure on shipments to several European buyers. It has also rejected numerous calls from Ukraine, a major transit gas route to Europe, to increase flows through its territory to compensate for at least some lost Nord Stream volumes.

“The fact that Gazprom claims there are such widespread technical issues in the compressors at Portovaya is very surprising given the previous reliability of Nord Stream flows and Gazprom’s operations in general,” said Stefan Ulrich, an analyst at BloombergNEF.

“This supports the argument of those who claim that the cuts in flows are purely political and that the issues around turbines are merely a diversionary tactic,” he said.