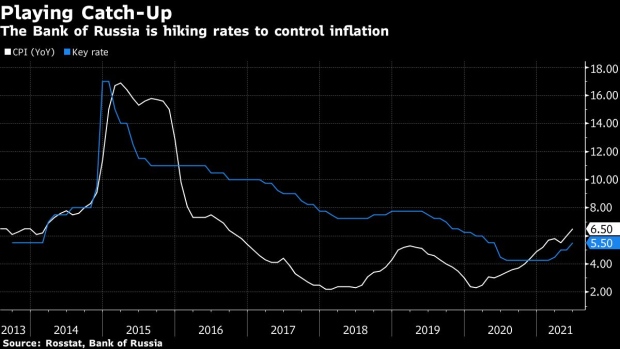 Russia’s central bank delivered its biggest interest-rate hike since the 2014 ruble crisis and warned there could be more to come as it struggles to contain surging inflation.

The benchmark rate was raised a full percentage point to 6.5% on Friday, in line with economists’ estimates and matching it to the pace of inflation, which hit a five-year high in June. Policy makers left themselves room to go higher if needed, with an average rate forecast as high as 7.1% in the second half of the year.

“We can’t ignore high inflationary expectations, we can’t let them get anchored at this level and force us to hike the key rate by even more,” central bank Governor Elvira Nabiullina told a press conference after the decision in Moscow.

It’s “premature” to suggest that today’s increase marks the end of the regulator’s tightening cycle, even though Bank of Russia softened the forward-looking wording in Friday’s statement, Nabiullina said.

Scarred by the hyperinflation of the 1990s, Russian policy makers pursued a more aggressive rate-hike path than most as a recovering global economy and surging commodities and food costs pushed price growth beyond the government’s 4% target. With parliamentary elections approaching in September, inflationary pressures have shown little sign of easing up and President Vladimir Putin bemoaned the rising cost of the so-called ‘borscht kit’ of staple foods at a government meeting this week.

Annual inflation is the fastest since 2016, while inflation expectations have spiked much higher, to 13.4%, according to surveys conducted by the Bank of Russia.

“There’s little surprise in another big rate move, but more importantly the door was left open for further tightening. We expect at least a quarter point in September, possibly more if price pressure fails to abate.”

Nabiullina has now increased rates by a total of 225 basis points so far this year. Friday’s move was the sharpest increase since an emergency hike of 650 basis points in December 2014, in the wake of an oil-price rout and Russia’s annexation of Crimea.

Bank of Russia’s tightening cycle helped make the ruble the most lucrative carry trade after Brazil’s real in the second quarter.

Friday’s increase puts Russia’s real key rate -- based on expected price inflation -- above 2%, the highest among peers after Turkey and Kazakhstan, according Dmitry Dolgin, chief economist at ING Bank. That should be supportive of further carry-trade driven portfolio flows, he said.

While Brazil and Russia have been hiking rates aggressively, other emerging markets are acting more slowly. Bank of Indonesia and the South African Reserve Bank held their key rates on Thursday. Peru’s central bank kept its rates unchanged earlier this month.