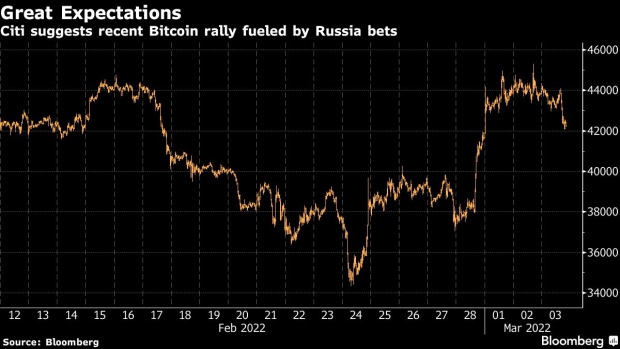 (Bloomberg) -- The Russians-are-evading-sanctions-via-crypto narrative looks off the mark.

As the world’s largest digital currency rallied 12% Monday, expectations of surging demand from Russia-based investors was cited by some in the industry as the proximate cause.

But recent blockchain data suggest residents in the sanction-hit nation have been in no hurry to trade crypto on major exchanges. Ruble-denominated crypto activity was just $34.1 million on March 3, according to Chainalysis. That’s down significantly from a recent peak at $70.7 million on Feb 24 -- and the $158 million record back in May 20 2021.

“This is a fraction of the volume that was seen during the all-time highs of Russian crypto trading volume reached May 2021,” said Madeleine Kennedy, senior director of communications at Chainalysis

Citigroup Inc. also estimates actual Bitcoin buying from the nation was just 210 BTC on average per day in the past week, versus a total daily volume that tends to range between $20 billion and $40 billion.

While Russians may still be trading on a peer-to-peer basis, large volumes should still be visible on the blockchain. That suggests the Bitcoin rally over the past week to above $45,000, as Moscow stepped up its invasion of Ukraine, has little to do with the nation’s buying power in practice.

“Russian volumes have been relatively small so far, suggesting that the price action is more due to investors positioning for an expected uptick in demand from Russia, rather than Russian demand itself,” according to Citi analysts including Alexander Saunders in a Wednesday report. “It will take meaningful capital flight to move the needle.”

Regulated exchanges can still provide services to Russia-based users outside the ever-expanding list of sanctioned entities.

“As if yet, we haven’t seen evidence of large-scale sanctions evasion by sanctioned Russian entities,” Chainalysis’ Kennedy said. “If the do attempt to use crypto, it would be very difficult for them to do this undetected at scale.”