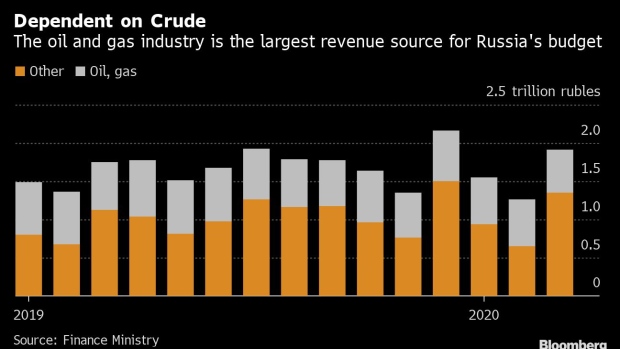 Rail wagons for oil cargo stand in sidings at the RN-Tuapsinsky refinery, operated by Rosneft Oil Co., in Tuapse, Russia, on Monday, March 23, 2020. Major oil currencies have fallen much more this month following the plunge in Brent crude prices to less than $30 a barrel, with Russia’s ruble down by 15%. Photographer: Andrey Rudakov/Bloomberg , Bloomberg

(Bloomberg) -- The Kremlin may have succeeded in ending its oil war with Saudi Arabia, yet the pain of crude’s crash is only just starting to hit Russia’s budget.

Next month, the nation’s coffers will get less than $1 for each exported barrel of oil, according to Bloomberg calculations based on the data from the Russian Finance Ministry. Oil export duty in May is set to tumble by 87%, compared to April, reflecting crude’s biggest crash in a generation.

“This duty level is the lowest since 2002 when the new export duty mechanism was introduced,” a representative from Russia’s Finance Ministry told Bloomberg.

Russia’s oil-export tax level is recalculated monthly, based on the average price for Urals, the nation’s main export blend, over a mid-month to mid-month period. The system cushions the budget from any immediate impacts of low prices. Between March 15 and April 14, Urals crude averaged just over $19 a barrel, according to the Finance Ministry.

The record-low crude-tax levels are alarming for Russia, which gets around 40% of its total revenues from oil and gas, and is facing multi-billions in extra spending to cushion the economic effects of lockdowns around the globe to curb the spread of coronavirus. A reduction in revenues is what the Kremlin wanted to avoid when it agreed to make new, unprecedented output cuts as part of the deal with the Organization of Petroleum Exporting Countries and other producers.

President Vladimir Putin, who only in March rejected Saudi Arabia’s proposal to deepen OPEC+ production cuts by 1.5 million barrels a day, last week agreed to take the reductions to almost 10 million barrels a day. It was a joint effort to rebalance the oil market and shield it from further pain, following the double blow of Saudi production hikes and a historic demand plunge amid the coronavirus.

In a painful climbdown, Russia agreed to reduce its crude production in May and June to a level last seen in 2003. The cuts of 2.5 million barrels a day will be a “tremendous challenge” for the nation’s oil industry due to difficult geological conditions, Oxford Energy analysts said in a research paper published Monday. Still, the deal is in the best interests of the country’s economy and its budget, Energy Minister Alexander Novak said at a government meeting Wednesday.

While the OPEC+ deal will contribute to stabilizing the oil market, the demand loss is so big that there is “no feasible agreement that could cut supply by enough” to offset it, the International Energy Agency said Wednesday in its monthly report. The IEA expects global storage facilities to run out of space by this sumer, while demand may see the biggest annual collapse this month.

The weakness in physical crude markets is putting pressure on the price, with oil again close to the lowest levels in two decades. As of Tuesday, Urals in North-Western Europe sold at less than $17 a barrel, according to price-reporting agency Argus Media. For Russia’s budget it means one thing: it may have to withstand extra-low oil revenues beyond May.