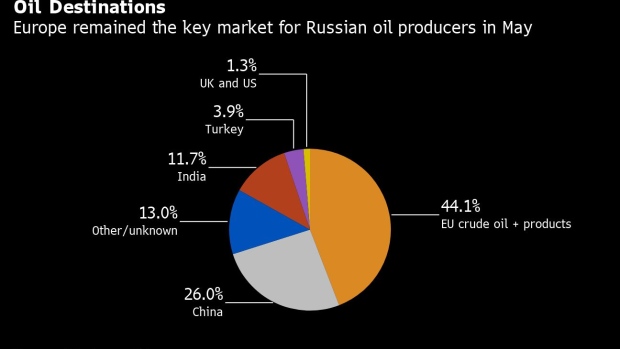 A valve wheel sits attached to crude oil pipework in an oilfield near Almetyevsk, Russia, on Sunday, Aug. 16, 2020. Oil fell below $42 a barrel in New York at the start of a week that will see OPEC+ gather to assess its supply deal as countries struggle to contain the virus that’s hurt economies and fuel demand globally. , Bloomberg

(Bloomberg) -- Russia’s oil-export revenues surged to around $20 billion in May despite shipping lower volumes, as a rally in global energy prices buoyed its coffers, according to the International Energy Agency.

That’s a 11% increase from a month earlier, taking Russia’s total revenue for shipping crude and oil products roughly back to levels before the invasion of Ukraine, even as exports fell by about 3%, the IEA estimates in its monthly report published Wednesday.

The decline in overall export volumes is mainly due to lower oil-product flows, while Russian crude shipped in May grew nearly by 500,000 barrels a day compared to the start of the year, mainly thanks to higher deliveries to Asia.

“China and India, which have both sharply increased crude oil purchases from Russia, are net product exporters and have no need to lift Russian products,” the IEA said.

Oil and gas supplies are the single-largest source of revenues for the Kremlin, and since Russia invaded Ukraine in February, Western nations and their allies have been imposing sanctions aimed at curbing the flow of money that finances the war.

While the US has already banned imports of Russian fuel, the European Union and the UK are preparing for a gradual phaseout of Moscow’s seaborne crude and oil products. Still, the nation’s producers have been able to replace their traditional clients with new buyers from Asia.

Asian buyers have been snapping up the cargoes but are demanding record discounts of about 30% compared to international benchmark Brent crude prices. However, this year’s Brent rally -- with prices surging almost 60% -- has partly offset the effects of the price reductions. Urals, Russia’s main export blend, averaged $78.81 a barrel in May, up almost 12% from a month before.

Still, Russia’s budget has not been able to reap the full benefits of the price rally due to a stronger ruble, Bloomberg calculations show. The nation’s currency gained almost 15% against the dollar last month as capital controls limited demand for foreign currency amid a flood of export revenues.

As a result, Russia’s budget oil and gas revenues in May fell to 871 billion rubles ($15.5 billion), sharply down from the record 1.81 trillion rubles in April, show calculations based on data from Russia’s Finance Ministry.