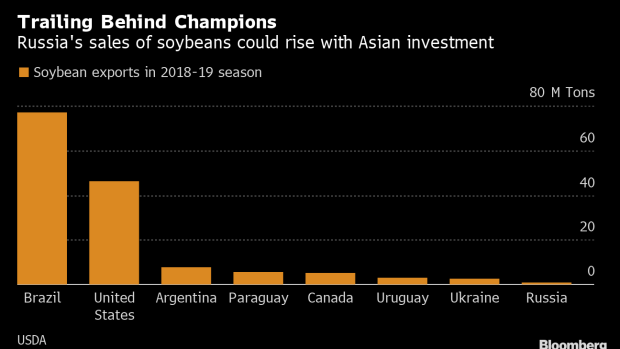 (Bloomberg) -- Russia wants more Asian food companies to use farmland in its Far East as the country seeks to open up new export markets.

The government has already helped to attract companies including Chinese conglomerate Legend Holdings Corp. and China Mengniu Dairy Co. Ltd. to invest in its Far East. Russia is now considering requests from Asian firms to farm another 1 million hectares (2.5 million acres) -- an area roughly the size of Jamaica, according to the head of a government agency.

Joint investments with other nations will help Russia boost economic development in a vast and underpopulated part of the country and open up more export markets. For China, sourcing more food from Russia would aid its import needs, while providing another source of supplies in the wake of a trade war with the U.S. that has shaken up agricultural markets.

“A lot of markets are closed for Russian farm products” in Asia, Leonid Petukhov, chief executive officer at Russia’s Far East Investment and Export Agency, said in an interview in Vladivostok. “One way to open them is to create incentives or attract investors from, say, China so they produce here, in partnership with Russians.”

A Russian joint venture set up by China’s Legend Holdings is about to collect its first crop of soybeans, corn and rice in the Far East, and plans to eventually run as much as 50,000 hectares. South Korean food company Lotte Corp. plans to boost its land area in the region to 150,000 hectares, Petukhov said.

China last year opened up its dairy market to Russia, which allowed Zhongding Dairy Farming Co. to make the first shipment of Russian liquid milk to China this month, Petukhov said. Separately, China Mengniu Dairy Co. Ltd. has agreed to set up a joint venture that may invest as much as 45 billion rubles ($690 million) to build dairy farms in Russia’s Far East.

While some Chinese companies had rented Russian farmland since the Soviet Union broke up in 1991, they were mostly relatively small and sometimes neglected to maintain soil fertility and observe crop rotation practices, Petukhov said.

“We are now going a different path,” he said. “We are looking for large players both on the Chinese and the Russian sides.”

Compared with the Soviet era, only about half of the farmland in Russia’s Far East is currently being used for agriculture, according to Petukhov. The government is now using drones to help identify vacant plots that would be suitable for potential investment.

“A collective farm fell apart, for example, and no one used the land afterwards. It became no one’s land,” Petukhov said. “We started to search for the lost hectares.”

To contact the reporter on this story: Anatoly Medetsky in Moscow at amedetsky@bloomberg.net

To contact the editors responsible for this story: Lynn Thomasson at lthomasson@bloomberg.net, Nicholas Larkin, Liezel Hill