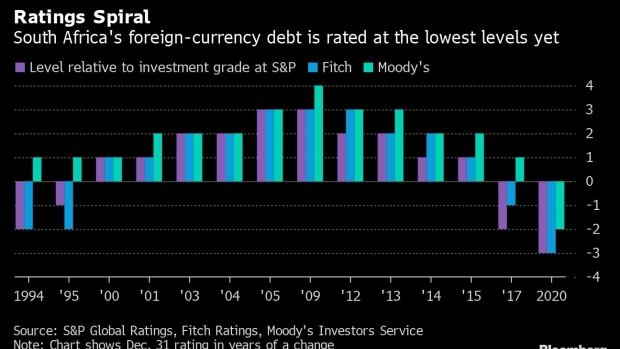 Electrical power lines above informal housing in the Imizamo Yethu settlement in the Hout Bay district of Cape Town, South Africa, on Wednesday, Aug. 3, 2022. South Africa's state-owned power utility Eskom Holdings SOC Ltd. warned it may have to implement rolling blackouts for the first time in more than a week due to a shortage of generation capacity. , Bloomberg

Finance Minister Enoch Godongwana said last month the government may shift between one-third and two-thirds of the power company’s debt of about 400 billion rand ($23.2 billion) onto its own balance sheet and attach strict conditions to the relief. Details, including the quantum and terms, of the transfer are expected to be announced in February’s budget.

The ratings company considers distressed exchanges, where debt holders accept losses or haircuts out of fear that troubled entities won’t be able to fulfill their original commitments, tantamount to a default.

S&P assumes the government will take on 250 billion rand, or almost two-thirds, of Eskom debt, equivalent to about 3% of gross domestic product, from 2023. While the higher costs of servicing sovereign debt will likely be offset by reducing or scrapping planned transfers to Eskom, there’s a risk the utility may need additional support to close liquidity gaps and meet its maintenance and investment plans, S&P said.

S&P affirmed its assessment of the country’s long-term foreign-currency rating at BB-, three notches below investment grade, with a positive outlook. It warned the outlook could be downgraded to stable if the debt transfer “significantly weakens” the government’s fiscal trajectory without tackling Eskom’s financial and operational shortcomings.

“We could raise the ratings if growth in economic output and fiscal consolidation continue on a sustained basis, against a backdrop of structural and governance reforms and supportive external sector dynamics,” S&P said.

While last month’s budget update showed an improvement in the trajectory of key fiscal metrics, with government debt seen peaking at 71.4% of GDP in the current fiscal year, the National Treasury didn’t directly account for the impact of Eskom’s relief. That risk, together with pleas for increased support from other state companies, higher-than-budgeted pay demands by civil servants and calls to expand the social welfare net, means state debt will probably rise to about 79% of GDP by 2025, S&P said.

The ratings company sees Africa’s most industrialized economy expanding 1.9% this year and 1.5% in 2023.