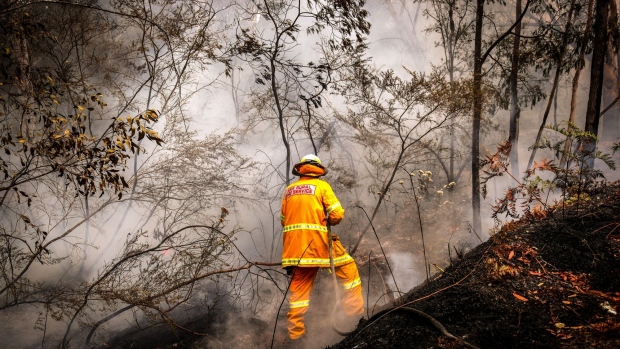 (Bloomberg) -- A startup backed by billionaire venture capitalist Chris Sacca and Airbus SE says it can turbo-charge forest re-growth in the aftermath of devastating wildfires like those raging across the U.S. West Coast.

Australia-based Dendra Systems uses specialized drones to survey vast areas of scorched land and produce an action plan to restore plant and tree life. The drones can then be used to sow seeds of native species much faster than traditional manual planting methods, at the same time providing a constant flow of real-time data on the progress of regeneration.

“We’ve got an aerial feeding system, it has been called a sky tractor, so that we can get into those hard to reach places,” said Susan Graham, Dendra’s chief executive officer and co-founder. “It’s much more efficient to be flying over the ground than walking over it.”

Huge wildfires are burning across California, Oregon and Washington, while Australia’s East Coast still bears the scars of its worst season on record. Re-forestation efforts can be set back by factors including weed invasion and soil erosion, and Dendra’s system uses artificial intelligence software to identify those issues quickly and tackle them before they get out of hand.

“You can’t make a tree grow faster, but you can prevent all of the stumbling blocks which happen,” Graham said.

Seattle-based DroneSeed Co. also uses drones to aid the forest regeneration process and claims its airborne delivery system is six times faster than a human planter, allowing it to sow 40 acres a day.

“With catastrophic fires we’re seeing increasingly that wildfire damage is not coming back as forest” as nature’s ability to regenerate becomes overwhelmed, Grant Canary, chief executive officer of DroneSeed, said in a Bloomberg television interview Aug. 25. “We can fix that, but we’ve got to build the tools.”

Dendra is also working with global resources giants including Glencore Plc, BHP Group Ltd. and Rio Tinto Ltd. on restoring land to its natural state after a mine’s life has ended. As well, it secured $10 million in a funding round led by Sacca’s green investment group, Lowercarbon Capital, alongside fellow investors including Airbus Ventures, At One Ventures and Future Positive Capital.

Drones can be valuable for measuring forest re-growth and providing a wealth of data on an ecosystem’s repair progress, but are only part of the solution, according to Arturo Sanchez-Azofeifa, from the University of Alberta’s Earth and Atmospheric Sciences Department.

“You can have all the drones and data in the world, but they have to come with a commitment to tackle climate change at a socioeconomic level,” said Sanchez-Azofeifa. “We need to see local people who have been affected by wildfires empowered to use this technology themselves, so they become invested in the recovery process.”

As the impact of climate change is increasingly felt across the planet, Dendra’s Gordon expects the company’s model for ecosystem restoration to be in strong demand.

“Unfortunately what we’re seeing with the trends in terms of increasing temperatures, is that the propensity for these high-intensity fires to occur is just going to increase,” Graham said. “So the demand to be able to understand our natural ecosystems is increasing.”