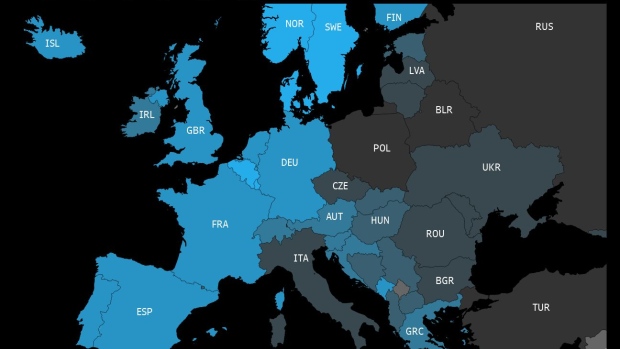 (Bloomberg) -- Soon after Giorgia Meloni’s landslide win in Italy’s election, members of the Rainbow Families association of same-sex parents joined a heated email chain about the potential impact of the incoming right-wing government.

The subject line read: “Now what?”

Meloni has signaled to voters and investors that she will govern as a moderate. But the 45-year-old leader of the far-right Brothers of Italy party opposes abortion and believes family is comprised by the union of a man and a woman, and LGBTQ people are far from reassured.

Already, Italy lags behind much of Europe in protecting their rights, placing near the bottom of one recent ranking — along with countries like Hungary and Poland which have cracked down their LGBTQ communities.

Marriage equality legislation has stalled in Italy, despite chiding from the European Union. So while same-sex couples have been able to enter a civil partnership since 2016, they still are not allowed to marry, meaning there is no automatic co-parent recognition.

These families are cut off from social benefits, help with school costs, paid parental leave and other state aid.

Same-sex parents seeking joint adoptions and legal recognition for their children must go to court (a lengthy and costly process which has become common in Italy) even though the Constitutional Court has urged parliament to legislate on the matter.

Meloni says she has no plans to overturn the civil union law, but has no interest in improving the legal situation for LGBTQ people, either. “You already have civil partnerships, what else would you ever want?” she said during a campaign rally after an activist jumped on stage to plead for more rights.

Earlier, in June, Meloni warned against the power of what she called the “LGBTQ lobby.”

There are some other dark clouds on the horizon.

Brothers of Italy backs a legal proposal to label surrogacy a universal crime. And in September, Federico Mollicone, who oversees cultural affairs for the party, pushed the state broadcaster not to air an episode of children’s tv show Peppa Pig featuring a family with two mothers. He claimed that Italy bans same-sex unions.

Read More:  The Sad Truth About How Italian Politics Are Holding Up LGBTQ Rights

“We are about to face an even more challenging period for the LGBTQ community in Italy, which will face a lack of legal protection,” said Alexander Schuster, a university researcher and a lawyer member of Rainbow Families.

“We expect the elections to impact on the attitude of individual judges and of local administrators, which often place undue burdens upon gay parents,” Schuster said. “The shift towards a conservative attitude had already started, for instance at the Supreme Court, but could get worse.”

It’s difficult to know exactly how many families are affected as data is scarce and Italy’s last official census dates back about 10 years.

“The ideology is very clear, and against our families,” says Andrea Rubera, a father of three with his husband Dario De Gregorio. “It will be harder to talk about diversity, inclusion and different kind of families in schools. That leaves me embarrassed, and without an answer when I am asked by my daughter why for the state we are not a family.”

The hope for parents on the email chain is that Meloni means it when she says she will be a moderate prime minister. But even if she is, without progress, Italy won’t feel like a safe country for them.