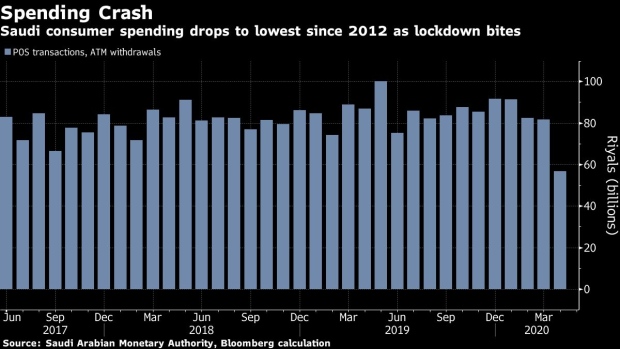 Saudi Arabia is raising a raft of customs fees in another policy revamp that could hurt consumer spending at a time when it’s already down.

The new levies, set to come into effect June 10, will be applied to a 74-page list of imported products, from dairy, meat and vegetables to rugs, police cars and building materials, according to a document released by the customs authority.

Fee increases differ for each item, ranging from half a percentage point for certain types of acid to 15 percentage points for some imported vegetables and herbs. Some of the items had been exempt from customs fees before.

The change could bring in much-needed non-oil revenue for the world’s largest crude exporter, and will likely give a boost to local agriculture and manufacturing. But it will also hit consumers’ wallets in a time of crisis. The government already plans to triple its value-added tax to 15% in July, which will further increase prices during a period when many Saudis are facing job loss or salary cuts.

While Saudi Arabia grows some of its own food despite the arid climate -- with local crops including tomatoes, cucumbers, peppers, mangoes and dates -- imported produce is more widely available in many supermarkets, and often cheaper.

“The move is likely aimed at both supporting domestic production and raising non-oil revenues -- once economic activity picks up,” said Monica Malik, chief economist at Abu Dhabi Commercial Bank. “However, as with the upcoming increase in VAT, the rise in customs duties will dampen the recovery, especially related to discretionary spending.”

Saudi Arabia’s gross domestic product is expected to contract the most in two decades this year as the coronavirus outbreak and oil-market turmoil harm the economy.

Consumer spending has already been battered by the pandemic-induced economic downturn. In April -- when many businesses were shuttered and people were confined in their homes for over two weeks by a 24-hour curfew imposed to slow the spread of the virus -- card-based point of sales transactions dropped 33% year-on-year, while ATM withdrawals fell 35% -- the latest data available.

“Citizens worry that the pressure on their living standards will outlast the current crisis,” Saudi columnist Khalid Al-Sulaiman wrote in a recent opinion piece in Okaz newspaper. Measures like higher VAT and higher customs fees “will reflect negatively in the long-term for the economy itself, which needs spending stimulated, not limited,” he added.