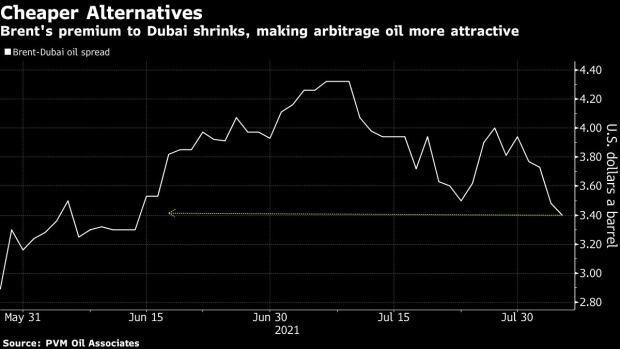 An offshore drilling platform stands in shallow waters at the Manifa offshore oilfield, operated by Saudi Aramco, in Manifa, Saudi Arabia, on Wednesday, Oct. 3, 2018. Saudi Aramco aims to become a global refiner and chemical maker, seeking to profit from parts of the oil industry where demand is growing the fastest while also underpinning the kingdom’s economic diversification. Photographer: Simon Dawson/Bloomberg , Sharon Cho

(Bloomberg) -- Saudi Arabia’s move to push up the cost of its oil in Asia may backfire as an outbreak of the delta virus variant in China damps demand, while the U.S. and Russia offer more competitively priced alternatives.

Saudi Aramco raised its Arab Medium and Heavy grades by 20 to 30 cents a barrel to the highest in at least four months for September sales to the region. While that’s less than the difference in the Dubai structure Aramco references in its pricing, demand for these medium and heavy-sour barrels may suffer as China battles an outbreak of the highly infectious Covid-19 strain.

U.S. varieties such as Mars -- of a comparable medium quality -- are being offered at rates that are lower than last month, while Russia’s Urals is also becoming cheaper, according to traders who buy and sell those barrels.

That could lead to Asian refiners seeking to buy lower amounts of contracted volumes from Aramco. Nominations were due Thursday and Aramco will likely notify buyers of their allocations next week. It could also see the spot market stay sluggish after a fairly lackluster July. Cargoes of some Middle Eastern medium and heavy-sour crudes have been falling to discounts against their official selling prices.

The market is also starting to see prompt cargoes offered as the Organization of Petroleum Exporting Countries and its allies restore more production.

China National Petroleum Corp. forecast that the latest Covid-19 wave could wipe out 5% of short-term oil demand in the country, the world’s largest crude importer. Local governments rushed to close off some cities and traffic is already thinner in virus-hit locations.