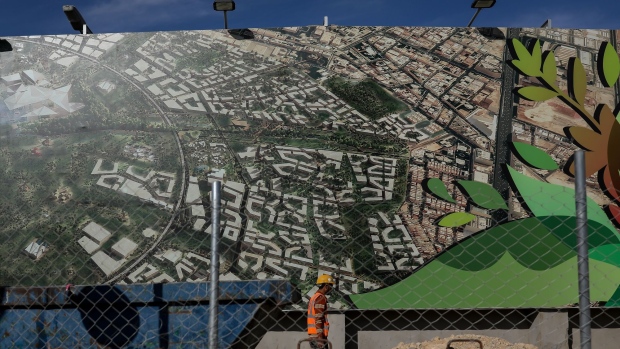 A construction worker passes an advertisement for the King Salman Park gardens and canals development in Riyadh, Saudi Arabia, on Tuesday, Dec. 14, 2021. The crown prince’s next grand plan is to defy the skeptics and turn Riyadh into a greener, cooler city for twice the population. , Bloomberg

(Bloomberg) -- Saudi Arabia’s sovereign wealth fund may invest hundreds of millions of dollars in four local construction firms as it looks to bolster an industry that’s been crippled by payment delays from the government in recent years.

The Public Investment Fund is in talks with Nesma Holding, El Seif Group, Almabani General Contractors and Albawani to buy minority stakes in them or their subsidiaries, according to people familiar with the matter. The PIF has hired Rothschild and GIB Capital as advisers and is looking to take stakes of about 30% in each company, the people said.

The $580-billion PIF is relying on construction firms to build a glut of projects as part of Crown Prince Mohammed Bin Salman’s drive to wean the Saudi economy off oil. The PIF is spending spending hundreds of billions of dollars on tourism resorts, entertainment venues and even an entirely new city.

Talks between PIF and the four contractors are at an early stage and may not result in any deals, the people said. The PIF and Rothschild declined to comment while, GIB Capital, Nesma, El Seif, Almabani and Albawani didn’t respond to requests to comment.

Several Saudi contractors plunged into crisis or collapsed as a result of mis-management and the government withholding payments following the 2014 crash in oil prices.

Saudi Contractors Are Said to Still Struggle With Payment Delays

The government appropriated a large stake in Saudi Bin Ladin Group, the country’s biggest construction firm, in 2018 as part of a settlement amid allegations of corruption. The company is in the process of restructuring bank debts.

Saudi Oger collapsed in 2017 largely due to late payments from government clients. The two firms had for decades been responsible for most of the major infrastructure developments in the country.