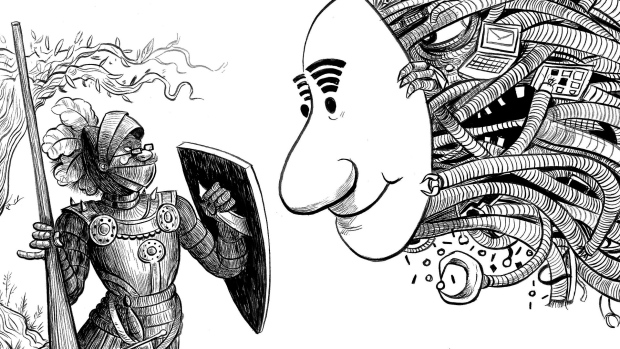 Financial fraud targeted at seniors isn’t new, but technology is making it even more prevalent.  Learn about some of the most common scams, and how not to be a victim.

Barb is not someone you’d take for a scam victim. At 69, she is still employed — holding a top position at a professional association. Unlike the stereotype of an elderly victim, she is well-educated and a pro with e-mail and social media.

But almost two years ago, she was defrauded of almost $4,000 by criminals who pretended, over the telephone, to be her own son in trouble. “The caller claimed to be my son,” she recalls. “He said he had been in an accident and had been arrested for impaired driving.”

The caller didn’t sound like her son, but said that he had a broken nose — which is why he didn’t sound like himself. He asked her to wire just under $2,000 to cover the damage to the other person’s car. Believing her son was in dire straits, she immediately wired the money.

Another call came in shortly after, this time from someone claiming to be her son’s lawyer. He said another $2,000 was needed for her son’s bail. She again wired the money.

“They had it down to a fine art,” she says with a sigh. “They had answers for everything. Even when I offered to call my son’s wife, he pleaded with me not to tell her, because it would cause problems at home — and I bought that story.”

Barb felt guilty about keeping the secret and called her daughter-in law, only to find her son safe and sound at home. The only thing injured was Barb’s pride and her pocketbook.

“These scammers were so good at playing on my emotions and [were such] excellent actors,” she says. “I am a mother who would do anything for her children. These criminals tapped into that and took advantage.”

Sadly, this isn’t an isolated incident. Stories abound in the media about scam artists defrauding unsuspecting seniors of their retirement savings and valuable assets. In 2013, the Canadian Anti-Fraud Centre reported that 42% of mass-marketing fraud complaints involve people over the age of 60.1 Technology has made it even easier to prey on unsuspecting victims.

“Scammers go after seniors because they know that many older people have money saved up,” says Robert Siciliano, online security expert for U.S.-based firm, Intel Security, “and some seniors aren’t that well-versed with the latest online schemes.”

Like Barb, many victims don’t know they have been defrauded until it’s too late. Greater awareness of these crimes is the best way to prevent them. Here are five common financial scams and what you can do to avoid being a victim:

Identity thieves will often try to steal details of your bank account, driver’s license, Social Insurance Number and other personal information by tricking you into entering those details online. You may receive an email that appears to be from your bank, from Canada Revenue Agency (CRA), or another seemingly trustworthy source where you may be asked to provide your personal and banking information. With your personal information in tow, there are numerous things that criminals can do to hurt your bottom line. They may try to apply for a credit card or take out a loan or a mortgage in your name, or syphon money from your bank accounts. Seniors are often a prime target for these scams, as they may not be as familiar with the latest fraudulent online or email tactics.

Tips: Be careful when providing personal details online, have strong passwords, and never share them. Don’t conduct financial transactions on a website with only ‘http’ in its address. Siciliano says secured sites generally have ‘https’ and a lock icon before it. “TD Bank will never ask you to provide any personal information, passwords or PINs through unsolicited emails,” says Heather Richardson, TD Wealth. “If you get an email that looks suspicious, don’t respond or click on any links or attachments.”

Tech-savvy criminals are using the latest technology to steal your credit or bank card data. They may secretly attach a device to an ATM card slot or store payment terminal to syphon the information. They may then use your data to make telephone or online purchases or even make a counterfeit card. While any unsuspecting person can become a victim of this scam, seniors may be more willing to hand over a card to a cashier to swipe and input information due to convenience or expediency.

Tips: When paying by card, never hand it over — swipe or insert yourself. Memorize your PIN and shield the keypad when you enter it. Siciliano also suggests making copies of the front and back of cards and keeping them in a safe place. This way, if they are lost or stolen you have the information on hand to quickly cancel them.

If you receive an email or call claiming you’ve won millions of dollars from a lottery or contest, or offering hefty compensation for your help in recovering large sums of money, an expensive item or clearing a cheque, chances are these are scams.

“Frauds like these have increased significantly as more people become digitally connected”, says Chris Mathers, a former RCMP officer who specializes in crime prevention and currently runs a risk consulting firm in Toronto. Seniors may be susceptible, especially ones who are trusting.

Mathers cites an instance of how a group targeted seniors in Ontario. Criminals surfed obituaries to identify widows. These women received a call or email from a purported marketing company, saying that their husband had won a car. When the widow disclosed that her husband had recently died, the company suggested that the prize could go to her as long as the taxes on the vehicle were paid before delivery. Unsuspecting widows forwarded the money but no car ever showed up.

“They pose as a real company,” he says. “Our large aging population is increasingly becoming victims.”

Tips: Ignore unsolicited messages. Don’t believe in a promise of money or items for cooperation from someone you don’t know personally. And even if the request comes from a name you recognize, double check to make sure it’s actually from the person you know.

Charity scams feed on people’s generosity. People are targeted by email or phone calls by fake, but familiar sounding, charities. They may tempt you by offering to provide charitable receipts for amounts greater than you’ve donated so that you can claim large tax credits. In 2015, an elderly person in Calgary was scammed out of more than $8 million after being befriended by a fraudster who later convinced the victim to funnel large sums of money into fake charities and international accounts. Unfortunately, criminals do prey on the generosity of seniors who are in a position to be charitable. Don’t take the bait: you could lose your money and your tax credit claims will be declined by the CRA.

Tips: Always ask the solicitor for the registered charitable tax number, confirm their status with the CRA before donating and get some first-hand knowledge about the charities yourself.

Telemarketing, online, or door-to-door sales scams will entice you to invest in a start-up with promises of high return on your investment. Often these schemes require you to buy or sell products to become part of a mathematically impossible chain-referral pyramid scheme. For seniors who worry about their financial future, a promise of oversized gains for a small investment and little or no effort may be tempting, but should immediately set alarm bells ringing.

Tips: Never be pressured into snap decisions. Do due-diligence on business investments and deals you are presented with before you hand over your money.

What Happened to Barb?

This is by no means an exhaustive list of scams and frauds targeting seniors, as scams evolve quickly as criminals change their tactics to avoid detection. To keep up-to-date, read about the latest online scams on the Canadian Anti-Fraud Centre website. Barb says that making sure details check out when someone asks for money will go a long way to weeding out scams.

“I wished I had even just asked which police station he was being held at, and then double-checked,” she says in hindsight. Police say that Barb will likely never see the money again. “They said that the chances are slim to none that it will be recovered,” she relays. “I’ve learned the hard way to be a little more questioning when someone asks for money.”