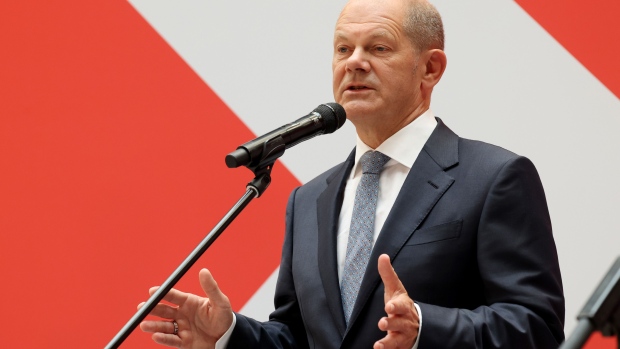 Olaf Scholz, chancellor candidate for the Social Democratic Party (SPD), delivers a statement to the media following the election, at the party headquarters in Berlin, Germany, on Monday, Sept. 27, 2021. Scholz defeated Chancellor Angela Merkel’s conservatives in an extremely tight German election, setting in motion what could be months of complex coalition talks to decide who will lead Europe’s biggest economy. , Bloomberg

(Bloomberg) -- Germany’s Olaf Scholz said a Social Democratic-led government will drive forward an expansion in renewables and energy-infrastructure investment as he expressed certainty that he’ll succeed Angela Merkel as chancellor by the end of the year.

“One of the most important aspects of the new government will be to decide on the expansion of energy production coming from offshore wind farms, wind from onshore plants and from solar,” Scholz told Bloomberg Television in an interview. “And we will have to increase investments into the grid.”

Scholz, on a two-day trip to Washington as Germany’s finance minister, expressed confidence that he’ll form a government by Christmas. “It looks very good, what we are doing,” Scholz said in English, referring to coalition talks.

Officials from Scholz’s SPD, the Green party and the pro-business Free Democrats are using his two-day absence from Germany to forge ahead toward a new government. Fourteen hours of exploratory talks this week yielded emerging consensus despite vast policy differences.

The parties will reconvene on Friday, when they’ll aim for a preliminary agreement. If they sign off, they’ll enter comprehensive coalition talks on forming a three-way alliance.

The SPD election victor offered a view into the negotiations, details of which have been kept strictly under wraps, by saying the timing of Germany’s coal exit will be key. “This is our plan” to exit coal, he said in the interview.

Scholz’s SPD narrowly beat Merkel’s Christian Democratic-led bloc in the Sept. 26, putting him in position to oust the conservatives from power after Merkel’s 16-year chancellorship. With Germany’s political landscape fragmented, the most viable coalition government will likely be made up of three parties.

And with the CDU in the midst of a power struggle, pressure is on for the SPD, Greens and FDP to set aside differences. Negotiators are seeking ways to bridge disparate positions on issues from spending and taxes to social policy and climate protection.

“This is not an easy task, but it can work -- we can do it,” SPD General Secretary Lars Klingbeil, who is working with counterparts from the two other parties on a text for Friday’s negotiations, told RTL/NTV television earlier.