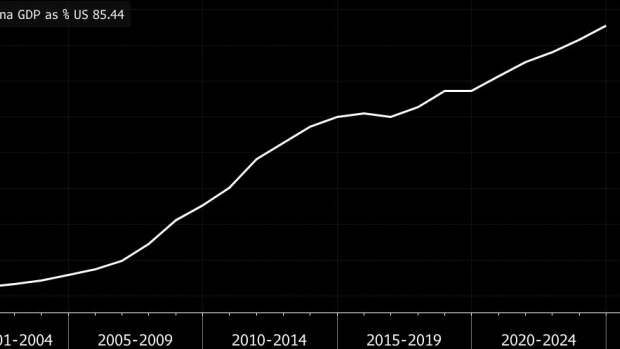 Senate Majority Leader Chuck Schumer, a Democrat from New York, wears a protective mask while arriving to a Senate Rules Committee hearing on Capitol Hill in Washington, D.C., U.S., on Tuesday, May 11, 2021. Lawmakers face an uncertain path forward on a debt limit fix, as experts offer differing projections of how soon they'll have to raise or suspend the ceiling to avoid a default on payments. , Bloomberg

(Bloomberg) -- An effort in the Senate to ramp up federal support for U.S. research and development in the aim of better competing with China heads toward an initial vote on Wednesday, posing a test of lawmakers’ ability to bridge sharp partisan differences across most of the congressional agenda.

The Commerce Committee is expected to vote on whether to send the package, framed around a $100 billion, five-year injection to American colleges and universities, to the full Senate. While Republicans and Democrats have both emphasized the need for stronger efforts to confront China’s campaign to best the U.S. in technological development, getting agreement on actual legislation and powering it through the 50-50 split in the Senate is proving a challenge.

Senate Majority Leader Chuck Schumer, who successfully propelled President Joe Biden’s $1.9 trillion pandemic-relief bill to passage in March, has individually sponsored the Endless Frontier measure that’s aimed at China. How it proceeds will offer a key indication as to whether a bipartisan deal is possible on a broader infrastructure package.

“The majority leader has set a very ambitious timetable, which we’re trying to accommodate,” Senator Roger Wicker of Mississippi, the top Republican on the Commerce Committee, said of the research-and-development-focused bill. “There is opposition out there. There are members of our committee that have severe reservations.”

The Senate panel takes up the bill on the same day Biden is hosting the top two congressional leaders from each party, and comes a day before the president meets with Republican lawmakers specifically on infrastructure.

The China-directed legislation has as its base text a bill introduced by Schumer and Senator Todd Young, an Indiana Republican. Initial signs for it were promising, with Schumer and Young both gaining the support of five co-sponsors in their parties. Yet recent developments suggested a rougher path. The introduction of the legislation was delayed and the committee vote -- known as a markup -- was postponed.

The Democratic chair of the committee, Senator Maria Cantwell of Washington, reached agreement with Wicker on a package of amendments. But there are an additional 200 outstanding proposals for changes to the bill, according to Wicker.

Young said, “I think we complete it tomorrow but if it takes longer, I think we’re all committed to doing this the right way.”

The sheer number of amendments reflects the fact that many lawmakers have competing priorities and proposals -- some of which are in direct conflict.

The bill would allocate $100 billion over five years to the country’s colleges and universities to bolster domestic research and development and an additional $10 billion to regional technology hubs. It has the support of numerous industry groups and trade associations, including the National Association of Manufacturers, the Semiconductor Industry Association and the Association of American Universities.

The bill has also attracted opposition, however, particularly in the House, where conservatives have argued it does not go far enough in challenging China and skirts too close to industrial policy, a phrase that rings alarm bells on the right.

The Republican Study Committee -- the largest GOP caucus in Congress, with more than 150 members -- released a three-page memo on Monday opposing the legislation.

“Instead of spending over $100 billion in misplaced funding that could flow back to China through their IP theft and espionage efforts, Congress should get serious about protecting American innovation from assaults from China, and unleash the private sector by removing regulatory and tax barriers to innovation,” the caucus said in the memo.

Once a bill does get to the Senate floor, further amendments will be proposed, potentially including measures to curtail the financial links between the U.S. and China.

A bill passed earlier this year by the Senate Foreign Relations Committee that imposes greater scrutiny over some foreign donations to universities could be added. But it’s stirred opposition from some supporters of the Endless Frontier package, including the Association of American Universities and the Association of Public and Land-Grant Universities.

Senator Bob Menendez of New Jersey, the chair of the Foreign Relations Committee, said Monday he expected his committee’s bill and the Endless Frontier Act would get floor consideration as soon as next week.

“The expectation is next week,” Menendez said, adding that Endless Frontier, in his view, “doesn’t deal with the political, diplomatic and other elements” of confronting China.

Senator John Cornyn, a Texas Republican, said in an interview on Tuesday that he expects the Senate to take up $50 billion in funding for his Chips for America Act, which is intended to enhance U.S. semiconductor manufacturing, when it considers the Endless Frontier Act.

Young, who has been quarterbacking the Republican side, predicted a vote closer toward the end of the month.

“The number of amendments we’ve received is mostly reflective of the fact that there’s a lot of interest in this,” Young said. “Toward the end of the month I think is fair.”

Schumer said he hoped to have the bill on the floor before the end of the current Senate work period -- which coincides with the end of May.