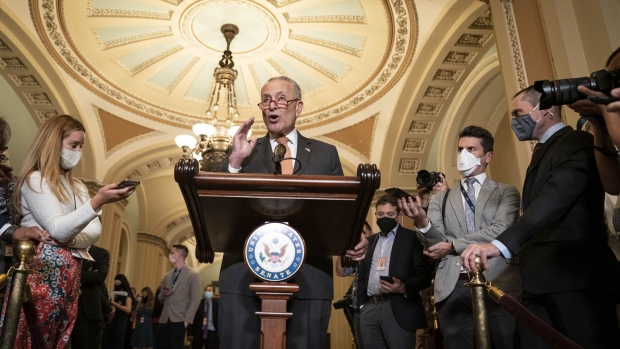 Senate Majority Leader Chuck Schumer, a Democrat from New York, speaks during a news conference following a weekly Democratic caucus luncheon at the U.S. Capitol in Washington, D.C., U.S., on Tuesday, Sept. 21, 2021. House Democrats set up a Tuesday vote on a bill that would suspend the U.S. debt ceiling through December 2022 and temporarily fund the government to avert a shutdown at the end of this month. , Bloomberg

(Bloomberg) -- Senate Majority Leader Chuck Schumer said the White House and congressional Democrats have agreed on a “framework” to pay for President Joe Biden’s economic plan. Schumer gave no details of the agreement in brief remarks at a news conference Thursday with Treasury Secretary Janet Yellen and House Speaker Nancy Pelosi. He said only that the agreement is on “the revenue side” of the expansive package of spending on social programs that Democrats have been struggling to put together. Pelosi said, “That means we are proceeding. We have made great progress.” Their comments follow Biden’s meetings Wednesday with group of moderate and progressive Democrats to resolve some of the disputes on elements from taxes to spending have threaten to stall or unravel the president’s plans.