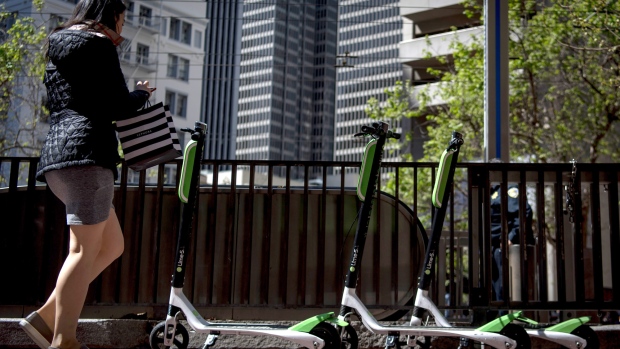 Bicycles stand inside LimeBike headquarters in San Mateo, California, U.S., on Tuesday, May 22, 2018. Neutron Holdings Inc. LimeBike is one of a handful of companies that have spent the last few months sprinkling hundreds of bikes and electric scooters around American cities. They allow people to unlock the vehicles with smartphone apps and ride them for as little as $1, leaving them sitting on the sidewalk when they've reached their destination. Photographer: Cayce Clifford/Bloomberg , Bloomberg

(Bloomberg) -- U.S. electric scooter-rental startup Lime has gone live for the first time in the U.K. -- but with electric bicycles rather than scooters, and in Milton Keynes, rather than the more predictable capital city of London.

From Tuesday, riders will locate and unlock Lime’s bikes with a smartphone app, ride them a short distance, then walk away when they’re no longer needed. Bicycles will cost 1 pound ($1.28) to activate, and an additional 15 pence per minute of use.

Electric scooter companies have struggled to launch in the U.K. because such devices are illegal on British roads, prompting Lime to start out with just electric bicycles. It won’t have much in the way of direct competition either, with China’s Mobike expected to launch a similar service in London at some point in the future, and the rest of the market dominated by non-electric alternatives.

Milton Keynes, which is about 55 miles north of London, has a history of adopting new transportation technology, having been used in the past as a test bed for autonomous vehicles.

Noa Khamallah, Lime’s senior director for government affairs, said the city was one of as many as 30 towns or boroughs the company approached to launch the service.

"We picked them for their innovative approach," Khamallah said in an interview. "They have autonomous cars and pods in testing. That’s heaven for innovation."

He said Lime and the city signed an agreement, which outlined that the bikes will be properly maintained and managed by the company, and that a 24-hour telephone support line would be available to riders. The company intends to launch in another U.K. city before Christmas, he said.

Lime, most recently valued at $1.1 billion, is one of the world’s largest electric scooter rental startups, alongside Bird Rides Inc., Skip Scooters, Voi Technologies, Tier Mobility, and Spin, all of which which have been attracting investors and customers at a rapid pace.

To contact the editors responsible for this story: Giles Turner at gturner35@bloomberg.net, Molly Schuetz