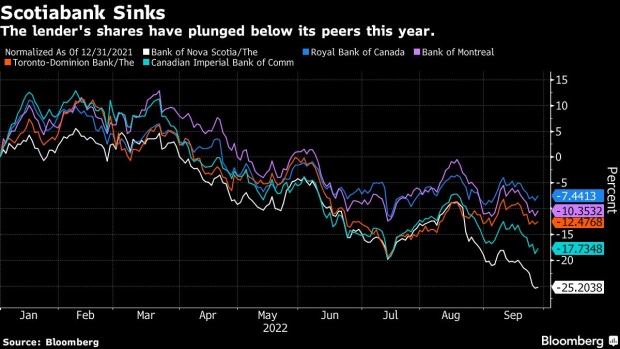 Employees stand behind a reception desk during the Bank of Nova Scotia annual general meeting of shareholders in Toronto, Ontario, Canada, on Tuesday, April 4, 2017. Scotiabank heads have said that the government may have to impose more measures to cool Toronto's housing market if prices remain "overheated" after the spring buying season. Photographer: Cole Burston/Bloomberg , Bloomberg

(Bloomberg) -- Bank of Nova Scotia shares are on pace for their worst year since 2008 as analysts warn of weakness in the Canadian lender’s international business and uncertainty about the shakeup in its leadership.

In a painful year for Canada’s Big Six banks, Scotiabank is the worst performer after a slew of analysts turned more pessimistic due to disappointing earnings from its Latin America division. That bearishness increased this week when the bank bucked tradition and hired an outsider to replace its retiring chief executive.

Investors sold the stock when the change was announced, sending the lender’s shares down 3% Monday, the most in a month, while peers climbed. The decline continued Tuesday, with Scotiabank closing at its lowest since December 2020. The shares rallied for the first time in seven sessions on Wednesday, but the stock is down 25% for the year, far worse than the 14% drop in the S&P/TSX Commercial Banks Index.

“The international unit is really the business that has to work for Scotia for investors to take notice,” Mike Rizvanovic, an analyst at Keefe Bruyette & Woods said in an interview.

A Scotiabank representative did not respond to email and phone requests for comment.

The stock’s underperformance isn’t new. Over the past decade, Scotiabank is up 24% compared with the bank index’s 87% climb, as the lender struggled to revitalize its international operation.

Scotiabank’s first- and second-quarter earnings beat expectations, largely because of a rebound in its Latin America business. But its third-quarter results were disappointing as the net interest margin of its international business contracted even as Latin American rates surged.

The miss prompted a handful of analysts -- including Keefe, Bruyette & Woods, RBC Capital Markets and BMO Capital Markets -- to downgrade the stock, citing macro economic stress weighing on the Latin America division in the near-term. Scotiabank now has just three buy ratings, with 11 holds and one sell, making it the only member of the Big Six with fewer than seven buys.

The latest blow to investor sentiment came from the decision to bring in Scott Thomson as CEO to replace Brian Porter, who is retiring after about a decade on the job. Thomson, the 52-year-old CEO of Finning International Inc., has been a member of Scotiabank’s board for six years.

Finning is a mining and construction equipment company with sales operations Latin America, which likely made Porter an attractive candidate, Rizvanovic said. But his lack of experience in Scotiabank’s management makes the hiring an anomaly for Canadian banks, which have a long history of promoting internally.

“Now they have to explain to their shareholder base that this is the right person for the role,” Rizvanovic said. “People were taken aback and thought, ‘Why is this happening? Is there something going on that necessitated bringing in an outsider?’ It’s not normally what you’d expect with a Canadian bank.”