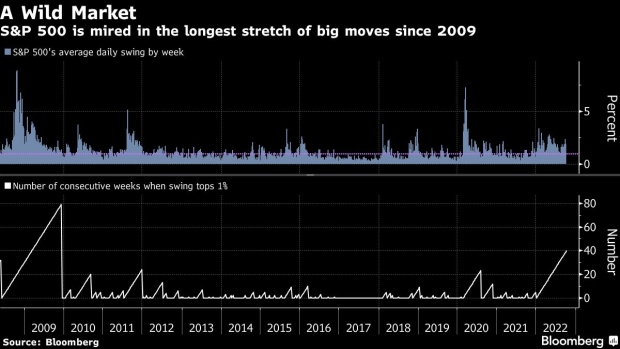 (Bloomberg) -- A week that saw the biggest stock advance in a month quickly became another week to forget for investors, who are now being punished in real time for each impulse of optimism.

Turmoil wasn’t confined to equities. From bonds to currencies and commodities, volatility has whipped up across assets and regions, prompting warnings that the Fed should stop rate hikes soon to avoid economic and financial fallout. Stress in the global financial system has recently been higher than any time since the immediate aftermath of the 2020 pandemic crash, data compiled by Bank of America show.

The week was a microcosm for the whole year, when any attempt to get a clean read on the economy and Fed policies has proved futile. While weakening manufacturing stoked speculation for a less hawkish central bank, a solid jobs report validated those who say thoughts of a Fed pivot are wishful.

“It felt like another month this week,” Rick Rieder, chief investment officer for global fixed income at BlackRock Inc. said on Bloomberg TV. “It’s the most exhausting trying to parse all these data.”

In the end, the S&P 500 rose 1.5% over five days, snapping a three-week, 12% slump. For a 40th straight week, the index has averaged a daily swing above 1%, a stretch of prolonged volatility not seen since 2009. Down 24% over nine months, this retrenchment has already outlasted five of the previous down cycles, or half of all the bear markets since the 1960s.

“This thing just drags on and on,” said David Donabedian, chief investment officer of CIBC Private Wealth US. “What tends to happen then is that some investors lose hope -- this idea that it’s never going to get better.”

Feeding the gloom is the impossibility of predicting the post-pandemic world. Central bankers and investors alike misjudged the stickiness of inflation. Lately it’s become clear that retailers miscalculated consumer demand and ended up stocking too much unwanted goods.

The futility of predicting anything was illustrated in Thursday night’s forecast from Advanced Micro Devices Inc., which slashed its sales estimate, blaming evaporating demand and a looming glut of chips. Coupled with an employment report showing lingering wage pressure, the warning fed a narrative of inevitable recession and earnings-season pain.

Lost in the downdraft was any question of whether AMD’s hair-raising numbers might mark a trend that could one day leaven central bank hawkishness. Namely, weakness in an economically sensitive tech manufacturer at the forefront of a previously raging debate around snarled supply chains.

Good news is bad news when it comes to economic data. Whether the same litmus will apply to corporate results over the next few months will be a pressing question for investors trying to decide if tightening financial conditions or a recession is their biggest bugaboo.

Seeking guidance from Wall Street prognosticators on corporate earnings offers little help. Among strategists tracked by Bloomberg, the forecast 2023 profits for S&P 500 firms now range from $200 to $250 a share. That translates to a wide spectrum of scenarios -- from a 13% expansion to an 8% contraction.

Blasted by relentless losses and endless Fed belligerence, investors of all stripes are backing off from the market. Retail day traders, once steadfast dip buyers, dumped stocks over the past two weeks at the fastest pace since March 2020, while hedge funds reduced their risky bets during the equity rally earlier this week, data compiled by JPMorgan Chase & Co. show.

“Investors are now learning that maybe their success the past few years had more to do with a rising tide lifting all ships and exposure to higher-beta areas than it did their investing acumen,” said Andrew Adams at Saut Strategy. “This is a bear market and must be treated as such,” he added. “It means that we actually have to focus on managing risk rather than just throwing more money at any dip.”