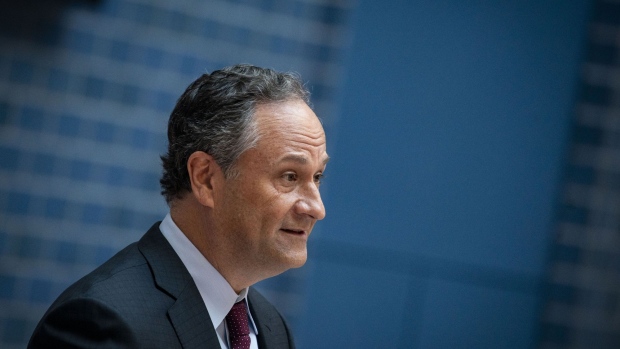 (Bloomberg) -- Doug Emhoff, the husband of Vice President Kamala Harris and the first Jewish spouse of a US leader, decried recent anti-Semitic comments by Ye and others saying, “it’s painful, it hurts.”

Emhoff, who largely keeps a discreet profile as the nation’s first Second Gentleman, described his unique place in history during remarks to the NewDEAL Leaders conference in Washington on Friday, according to the White House.

“There’s never been a Jew married to a president, or vice president, or has been president or vice president,” Emhoff said. “As it turns out, that has become a very big deal in the Jewish community and in other communities that aren’t represented. And I felt it was very important to kind of take that on, accept that responsibility, and really lean into it.”

He spoke a day after Ye, the hip hop performer and producer formerly known as Kanye West, praised Adolf Hitler on the Infowars program of the right-wing conspiracy theorist Alex Jones.

“So I don’t want it to feel normal,” Emhoff told the gathering. “I don’t want people to think well, it’s just words, it’s just Kanye, no - this matters. This is important. We have to all step up and speak out about this as leaders in your communities.”

“This not OK. It’s not OK,” he added. “We cannot be silent. We gotta push back. We gotta speak up. And we cannot make this normal. We cannot.”

In a tweet earlier Friday, President Joe Biden condemned anti-Semitism, and rebuked political leaders who he said “should be calling out and rejecting anti-Semitism wherever it hides. Silence is complicity.”

He mentioned no one by name, but last week former President Donald Trump had dinner with Ye and Nick Fuentes, a white supremacist, at his Mar-a-Lago resort in Florida. While some prominent Republicans have criticized Trump over the now notorious episode, others have not. Several have denounced anti-Semitism in general or assailed Fuentes without mentioning Trump.

Adidas AG and other companies cut ties with Ye after he made a series of antisemitic and racist remarks.

And Elon Musk, the owner of Twitter Inc., said late Thursday night that Ye’s account on the social media platform had been suspended. Ye had posted an image combining the Star of David with a swastika, which was  removed by the company.