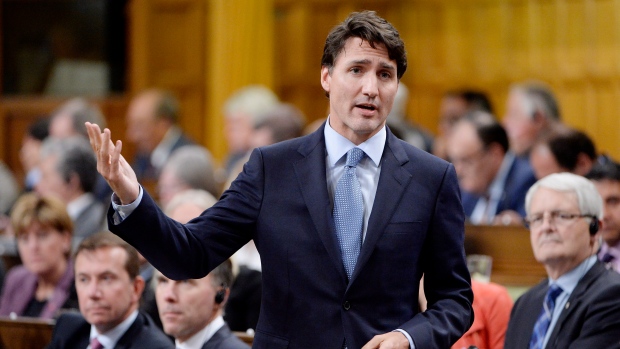 Prime Minister Justin Trudeau speaks during question period in the House of Commons on Parliament Hill, in Ottawa on Tuesday, Oct. 16, 2018. , The Canadian Press

OTTAWA - The Senate's banking committee is urging the Trudeau government to take big steps on taxation that include introducing immediate corporate tax cuts to ease competitiveness concerns and revamping the whole tax system.

In a report Tuesday, senators called on the federal Liberals to launch a royal commission on taxation with a goal of finding ways to improve the system's efficiency, simplicity and international competitiveness. They want a study completed within three years.

In the meantime, the committee members also recommended the government act quickly to entice more companies to invest in Canada - with changes such as slashing the corporate tax rate and temporarily allowing firms the full and immediate writeoff of capital spending.

“The committee is of the view that a royal commission on taxation may take several years to complete and that the situation in Canada is such that urgent action is needed,” said the report.

“The committee urges the Department of Finance Canada to consider a staged approach that would provide immediate relief for Canadian businesses as well as a road map for comprehensive reform.”

Other ideas put forward in the report recommend the government help companies commercialize their intellectual property, focus on deepening Canada's trade ties to fast-growing economies like China and India, and upgrade the country's trade infrastructure - including ports, roads, railways and pipelines.

The committee's recommendations come with federal Finance Minister Bill Morneau already facing pressure from business leaders to address competitiveness issues in response to a U.S. tax overhaul that many warn has put Canada at a disadvantage.

Morneau intends to announce plans in his fall economic update to bolster Canada's competitiveness - but sources have said he's looking at targeted measures rather than broad-based corporate tax cuts.

The Senate report said it's critical for Canada to make sure it can continue to compete. It warned that without the recommended changes the country's “economic prosperity will suffer.”

“The committee recognizes that making major changes to Canada's tax system will not be an easy thing to do,” the report said.

“It will require much careful thought and input from all Canadians to determine the appropriate course of action.”