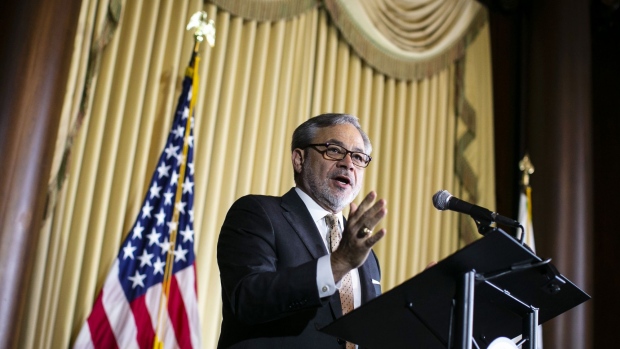 (Bloomberg) -- The Senate voted Monday to confirm Dan Brouillette to lead the Department of Energy, putting in place a former lobbyist before the agency to replace Rick Perry.

Brouillette, who backed Perry’s efforts to help unprofitable coal and nuclear plants, is no stranger to the Energy Department, having served as Perry’s No. 2 official as well as working there during the George W. Bush administration. He was confirmed by a vote of 70 to 15.

Perry had been grooming Brouillette, 57, to succeed him for months while planning his own departure. In recent months, Brouillette has more frequently served as the public face of the Energy Department both on missions abroad and at U.S. events, even sitting in at cabinet meetings when Perry was out of the country on travel.

Like Perry, Brouillette is a supporter of efforts -- unsuccessful thus far -- to subsidize coal and nuclear plants that have been unprofitable in the face of competition from cheaper natural gas and renewables, which has forced operators to close down.

Other aspects of Perry’s agenda, which include selling more U.S. natural gas abroad and protecting the electric grid from cyber attack, aren’t expected to change with Brouillette on the job.

Perry, one of the administration’s original cabinet secretaries, resigned from the department Sunday amid mounting scrutiny in the House impeachment inquiry over his discussions with Ukraine, though he had been planning his departure well before the impeachment inquiry began.

To contact the editors responsible for this story: Jon Morgan at jmorgan97@bloomberg.net, Elizabeth Wasserman, Laura Curtis