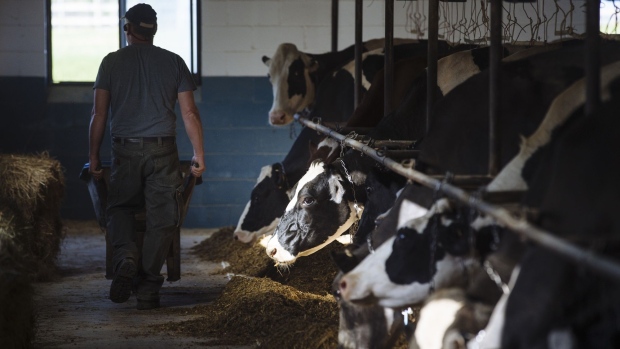 A worker pushes a wheelbarrow past cows in the dairy barn at a farm in Ancramdale, New York, U.S, on Friday, May 22, 2020. The Nourish New York Initiative is providing $25 million to food banks for the purchase of surplus agricultural products from New York State farms to distribute to populations who need them most. , Bloomberg

(Bloomberg) -- Dwindling U.S. milk output isn’t going to recover any time soon, according to an industry group, signaling dairy inflation may be here to stay.

There have been pullbacks recently in the number of cows in U.S. herds, and consequently in milk production. The reductions have been “dramatic,” and futures markets are indicating that the trend will last “well into 2022,” the Arlington, Virginia-based National Milk Producers Federation said in a Jan. 20 report.

The pandemic is behind the dropping figures. It’s getting too pricey to feed cows due to expensive grain, so farmers are shrinking their herds and sending animals to slaughter. For the cows that remain, they’re getting fed less, which means they’ll produce less milk. Rising labor and energy costs are also making it tougher for dairies to net profits.

To top it off, there are also reports of “severe” impacts on dairy plants relating to the omicron-virus surge, including anecdotes of some facilities “limping by” or even temporarily shutting down, Matt Gould, editor of The Dairy Market Analyst, said in a note.

All of that’s sent prices for dairy products like butter and cheese soaring. Butter futures on the Chicago Mercantile Exchange are trading at the highest since 2017, while cheese and milk are the priciest in a year. Retail prices can often follow wholesale price trends, filtering down to consumers. Milk at grocery stores is already seeing the highest average prices since 2015, according to U.S. government data.