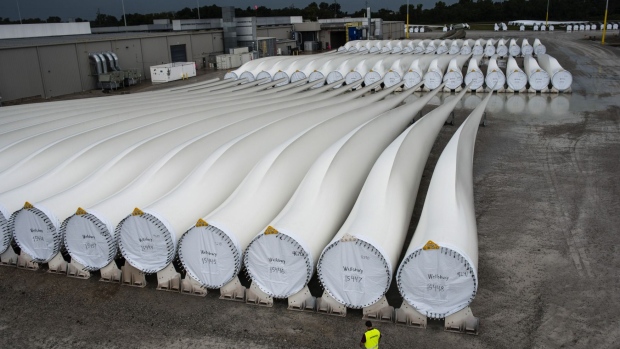 A worker walks along finished blades awaiting transport at the Siemens AG turbine blade plant in Fort Madison, Iowa, U.S., on Wednesday, Aug. 20, 2014. The U.S. Export-Import Bank agreed to lend $65 million for Peruvian wind farms that will use Siemens AG turbines made in Fort Madison and at another Siemens plant in Kansas. Photographer: Timothy Fadek/Timothy Fadek / Bloomberg News , Bloomberg

(Bloomberg) -- Siemens Energy AG is overwhelmed with requests to build turbines in countries that are tapping wind resources but concerned about global supply chains or insistent on broadening the local economic benefits of renewable power.

“The challenge we have is how many countries are saying, ‘Hey, you need to build a factory here’,” Chief Executive Officer Christian Bruch told reporters on Tuesday.

Bruch said the push from governments for domestic manufacturing may well be down to the pandemic, which has upended supply chains. But those international networks must survive for Siemens Energy, which operates in nearly 100 countries, to build a successful business around renewables, he said.

The world last year added more gigawatts of wind power to grids than ever before as part of a global energy transformation away from fossil fuels.

In some countries, the requests may have more to do with a rise in protectionist policies. For example, Argentina has some of the world’s best wind for generating electricity, but the government often forces investors to buy a portion of parts locally. Denmark’s Vesta Wind Systems A/S and Germany’s Nordex SE have set up Argentine plants.

Bruch spoke ahead of a Latin America webinar next week organized by Siemens Energy, which was spun off from the Siemens conglomerate last year and is behind about 17% of the world’s power.