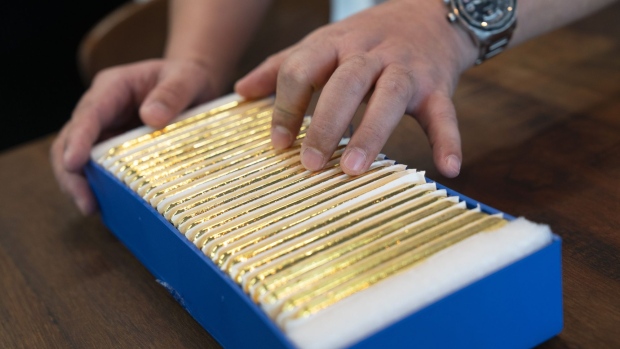 An employee counts one kilogram gold bars in a box at the Precious Metals Exchange (SGPMX) at Le Freeport in Singapore, on Tuesday, Sept. 15, 2020. Gold is having trouble building on gains that pushed it to a record $2,075.47 an ounce last month, posting weekly losses in three of the past four weeks. Photographer: Wei Leng Tay/Bloomberg , Bloomberg

(Bloomberg) -- Singapore increased its gold reserves by about 20% earlier this year in a largely under-the-radar move that saw holdings expand for the first time in decades.

The purchases, which totaled about 26.3 tons, took place over May and June, according to data from the Monetary Authority of Singapore’s International Reserves and Foreign Currency Liquidity reports. The move came to wider prominence when it was picked up in the International Monetary Fund’s monthly update, which shows it was the first increase in figures dating back to 2000.

MAS didn’t disclose how much it paid for the bullion, but at today’s price that would be about $1.5 billion. The authority didn’t immediately respond to an email seeking comment.

The central bank may have preferred to not draw attention to the amount of gold in its international reserves as this might encourage foreign-exchange markets to view the purchase as a move that strengthens the city-state’s reserve position and potentially put upward pressure on it’s exchange rate, according to a blog post by Ronan Manly, a precious metals analyst at Singapore dealer BullionStar.