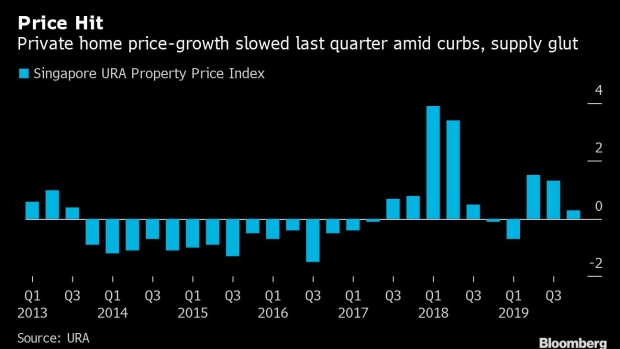 Traffic drives along a road under a SMRT Corp. train travelling along an elevated track past residential buildings at the My Manhattan development in the Simei area of Singapore, on Saturday, June 3, 2017. Hunger for Singapore land is adding to signs the city’s housing market is making a comeback after three years of declining prices. With new home sales surging after an easing of property restrictions in March, developers are becoming more aggressive in bidding at land auctions. Photographer: Sanjit Das/Bloomberg , Bloomberg

(Bloomberg) -- Sales of private apartments in Singapore fell in December as fewer new developments were launched, in a further sign the property market is cooling.

Developers sold 538 units last month, down from 1,165 in November, Urban Redevelopment Authority data released Wednesday showed. The decline came as fewer projects were launched, with 370 new apartments hitting the market -- the lowest for all of 2019 -- versus 947 in November.

The property market is also groaning under a glut of about 32,000 unsold apartments, which the central bank and developers have warned may push prices down further.

To contact the editors responsible for this story: Katrina Nicholas at knicholas2@bloomberg.net, Peter Vercoe, Candice Zachariahs