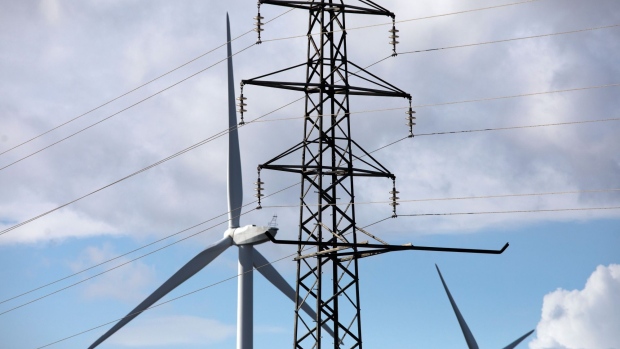 Wind turbines next to an electricity pylon near to Clacton On Sea, U.K., on Tuesday, Oct. 6, 2020. U.K. Prime Minister Boris Johnson committed to boosting U.K. offshore wind power as part of his delayed plan for a "green industrial revolution" as he seeks to get his stalled domestic agenda back on course. Photographer: Chris Ratcliffe/Bloomberg , Bloomberg

(Bloomberg) -- Singapore’s move away from dependence on natural gas may not bring lower power costs, the country’s trade minister said, after the nation state faced a dramatic spike in electricity prices.

“The transition to renewable energy, including imported electricity, may not mean cheaper electricity,” Trade and Industry Minister Gan Kim Yong said at the Singapore International Energy Week conference. “While the cost of generation may be lower, the costs of transmission and backup, as well as necessary grid enhancements, will add to overall costs. This is an inevitable but necessary trade-off.”

Singapore plans to import as much as 4 gigawatts of lower-carbon electricity by 2035, or about 30% of its anticipated supply, according to Gan. The country will begin the process by “ironing out” technical and regulatory issues in cross-border power trading that observers say have stymied progress on a Southeast Asian-wide grid for decades.

Countries around the globe are wrestling with surging fuel prices and power shortages or curbs that are stifling key industries, posing a threat to global growth. Singapore has been hit as some power providers have announced they will cease retail operations after wholesale prices surged to a record. The tiny state generates 95% of its power from natural gas imported by pipeline or tankers.

Singapore has decided to deploy some of its older, retiring combined-cycle gas turbine capacity as back-up generation in the event of emergencies, said Gan. The country’s total electricity generation capacity decreased to 12 gigawatts in 2020 largely due to the retirement of these units.

Longer term, the country is increasing its investment in projects researching the use of hydrogen in the power sector as well as carbon capture and storage technology.

“What we are experiencing is transitional pain,” said Wong Kim Yin, chief executive officer of Sembcorp Industries Ltd., said at the conference. “In 10 years time, we’ll be seeing the cost of hydrogen enter a price range where it will be feasible.”