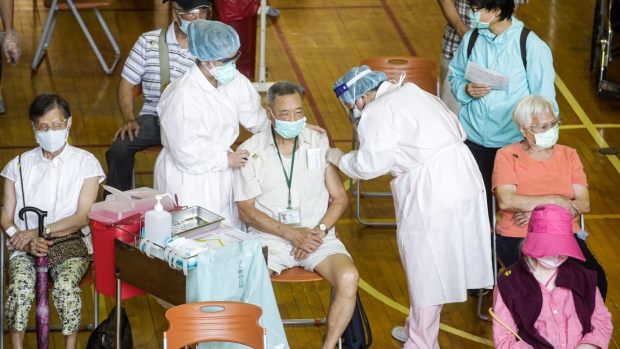 A deserted street in the Chinatown area of Singapore, on Tuesday, Aug. 3, 2021. Daily virus case counts in Singapore have stayed well above 100 since July 19, after an outbreak at a fishery port led government officials to reimpose tighter Covid restrictions. , Bloomberg

(Bloomberg) -- Singapore is easing quarantine requirements for visitors from Taiwan. Meanwhile, California will require health care workers to be fully vaccinated against Covid by Sept. 30.

BlackRock Inc. and Wells Fargo & Co. are pushing their return-to-office plans back a month to early October, while Amazon.com Inc. says corporate employees won’t have to return to the office regularly until January. CNN fired three employees for coming to the office unvaccinated.

Moderna Inc. said its vaccine remained 93% effective through six months after the second shot. The U.S. Food and Drug Administration expects to have a strategy on vaccine boosters by early September, Dow Jones reported.

Singapore to Lift Self Quarantine for Taiwan Arrivals (6:40 a.m. HK)

Singapore will no longer require a 14-day stay-home notice for people traveling from Taiwan, so long as they test negative for Covid upon arrival, the Ministry of Health said in a statement.

Short-term visitors who spent at least the last 21 days in Taiwan can apply for an Air Travel Pass with immediate effect to enter Singapore on or after Aug. 12, the statement said.

California will require healthcare workers to be fully vaccinated against Covid-19 by Sept. 30, Governor Gavin Newsom said in a tweet.

The highly contagious delta variant of the coronavirus has pushed up case counts since California fully reopened its economy in June. The test positivity rate has climbed to 7.1%, the highest since February.

New Jersey Governor Phil Murphy will mandate masks in schools, Politico and NJ.com reported, citing unnamed sources. Murphy had recently said he would leave such decisions up to the districts, but reserved the right to intervene if cases climbed or U.S. recommendations changed.

Murphy has scheduled a “major public health” announcement for Friday at an elementary school in East Brunswick, New Jersey. His press office declined to elaborate further.

Puerto Rico will require all visitors staying at hotels or short-term rentals to present proof of Covid-19 vaccination or submit to weekly PCR tests.

Governor Pedro Pierluisi announced the new measures Thursday, as the U.S. territory is seeing a spike in new cases driven by the delta variant. The island of 3.3 million people has registered 149,148 cases of the coronavirus and 2,594 deaths due to Covid-19.

Inbound passengers to Puerto Rico are already required to show proof of vaccination or a recent test. Under the new rules, those staying at a hotel or an Airbnb for more than a week, and who aren’t vaccinated, will have to be retested weekly.

Pierluisi said he wouldn’t hesitate to reinstate curfews or limit public gatherings if cases continue to increase. “We all have to row in the same direction to beat this virus,” he said in a statement.

CNN has mandated that all employees working in its offices or in the field be fully vaccinated. In a memo to staff Thursday, President Jeff Zucker said the network has “a zero-tolerance policy” and fired three employees after learning this past week that they were coming to the office unvaccinated.

The U.S. Food and Drug Administration expects to adopt a plan on vaccine boosters by early next month, Dow Jones reported, citing people familiar with discussions within the agency who weren’t identified.

The Biden administration is pushing for a faster release of the plan because those 65 and older, along with people who are immunocompromised, may need the boosters as soon as this month if they had their shots in December or January, Dow Jones said.

Some school districts in Florida are pushing back against Republican Governor Ron DeSantis’s executive order that forbids them from mandating students to wear masks.

DeSantis signed the order on July 30 dictating that schools should leave masking decisions to parents. It also said that if the State Board of Education determines a district is unwilling or unable to comply with the order, the board can withhold the transfer of state funds until the district complies.

“The fairest thing to do is to let parents make the decision,” DeSantis said during a press conference on Thursday.

Hospitals will be required to track and report vaccination status for their health-care personnel to comply with a rule from the Biden administration.

The requirement is an effort to “support public health tracking and provide patients, beneficiaries, and their caregivers important information to support informed decision making,” according to the Centers for Medicare & Medicaid Services.

Hospitals are required to report certain quality measures to the CMS or risk losing funding.

Amazon.com Inc. says corporate employees won’t have to return to the office regularly until January, becoming the latest big company to postpone its resumption of regular work habits as infections from the delta variant surge in the U.S.

The largest online retailer told employees in an email on Thursday that they should plan to begin going to offices the week of Jan. 3. Amazon had previously said its office workers in the U.S. and several other countries should resume their jobs mostly on-site beginning the week of Sept. 7.

Montana health authorities said 89% of the rural state’s hospitalized Covid-19 patients in June and July were unvaccinated and that the number of admissions and positive tests are on the rise.

The median age of the 358 patients was 64, Adam Meier, state public health director, said in a statement Thursday. More than 445,000 residents are fully vaccinated, about 48% of Montana’s eligible population.

Chile will start to vaccinate residents with a third dose against coronavirus next week in a campaign that mixes shots from different providers, as the government seeks to protect the population from the delta variant.

Starting on Aug. 11, people aged 55 and older who received two doses of Sinovac Biotech Ltd.’s vaccine earlier this year will start to receive an AstraZeneca shot, said Paula Daza, the country’s health undersecretary. In September, the population under age 55 that’s already been inoculated with the China-made vaccine will receive a booster from Pfizer-BioNTech.

Chile joins countries from Uruguay to Israel in announcing third doses as the world moves to deal with the rapid spread of the delta variant. They are looking past the World Health Organization’s calls for a moratorium on booster shots to enable poorer countries to catch up in inoculation rates.

French officials said that another 52 residents died of Covid-19, bringing the official toll to 112,133. The nation reported 26,460 new cases in the past day.

Meanwhile, 65% of the general public have received at least one vaccine dose, 75% of people age 12 and over and 85% of those most at risk, such as the elderly, Health Minister Olivier Veran said during a visit to a hospital in Aix-en-Provence.

“The ICU unit here is full of people who regret not being vaccinated,” Veran said, adding that hospital staff told him it feels “a bit like before a tsunami” as the delta variant bears down.

BlackRock Inc. and Wells Fargo & Co. are pushing their return-to-office plans back a month to early October, as Wall Street grapples with rising Covid-19 rates across the U.S.

BlackRock is allowing workers to choose whether to come into U.S. offices through Oct. 1, according to a memo. Wells Fargo, with almost 260,000 employees, will now begin bringing back staffers who have been working remotely starting Oct. 4 rather than Sept. 7, as previously announced, according to an internal memo Thursday from Chief Operating Officer Scott Powell.

The shift from both the world’s largest money manager and the company with the largest workforce of any U.S. bank signals the financial industry is rethinking its return-to-office plans as the highly contagious delta variant sweeps across the country. While the biggest U.S. banks have so far stopped short of requiring their employees to be vaccinated, BlackRock has only allowed fully inoculated workers to come back.

Florida hospitals are struggling to get oxygen due to a rise in Covid-19 cases and Governor Ron DeSantis’s decision not to declare a state of emergency.

A shortage of truck drivers who are qualified to transport oxygen, as well as restrictions around how they can be on the road mean that the supply isn’t getting to the institutions that need it most.

There is “plenty of oxygen, just not in the right area,” Brigadier General David Sanford, director of the White House supply chain task force, said in an interview.

New York City’s daily hospitalizations due to suspected Covid-19 virus totaled 127 Aug. 3, a 27% jump from the previous day and the most since late April, according to Health Department data.

Confirmed and probable cases of the virus averaged 1,365 over seven days as of Aug. 3, after hitting 1,436 the previous day, the department reported Thursday.

The caseloads and hospitalizations have risen even as city officials have ordered municipal workers to get vaccinated or get tested weekly, and mandated that only vaccinated people will be admitted or allowed to work inside at restaurants, bars, theaters and other indoor activities.

Mayor Bill de Blasio has also urged all New Yorkers to wear masks in public indoor and crowded outdoor settings. More than 80,000 first vaccine doses were given last week, compared with 57,000 in the first week of July, de Blasio said during a Thursday news briefing. About 4.6 million New Yorkers have been fully vaccinated, according to the Health Department.

More than 6,400 people died from the disease this week, according to the World Health Organization said. New cases rose 19%.

Moderna’s final analysis of the company’s late-stage study, described in a statement on Thursday, suggests its vaccine’s protection remains stable for long after recipients complete the standard two-dose regimen. The 93% effectiveness level is just short of the shot’s initial efficacy of 94%.

Beijing halted the use of community spaces for entertainment, limited the number of visitors allowed at parks and scenic areas and implemented a two-week quarantine for visitors from high-risk areas. Officials also curbed train service and subway usage. Public transport and taxi services were curtailed in 144 of the worst-hit areas nationwide.

Tokyo reported a record 5,042 new cases, as the Olympics entered its final few days in the Japanese capital.