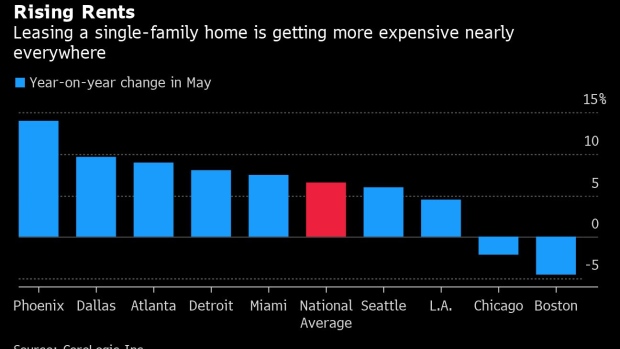 (Bloomberg) -- Single-family home rental prices in the U.S. jumped 6.6% in May from a year earlier, according to CoreLogic Inc., signaling that the housing boom may add to inflationary pressures in the economy.

The increase was the fastest since at least 2005, CoreLogic said. Single-family homes, which make up about half of the rental market, have seen a surge in demand during the pandemic as Americans sought to move to less densely populated neighborhoods.

U.S. inflation has accelerated in recent months, driven by strong consumer spending in a reopening economy and bottlenecks in the supply of key products like semiconductors. Most policy makers and analysts expect the spike in prices to be transitory. But rents are what economists call “sticky” -- increases are hard to reverse -- and when they rise, it’s seen as an indicator that inflation could prove more persistent.

The increase in single-family rents was steepest at the top end of the market, with freestanding homes climbing by 9.2% while attached properties -- like condos or townhouses -- rose 3.6%, CoreLogic said. Regionally, western cities like Phoenix, Tucson and Las Vegas saw the biggest jumps. In Chicago and Boston, single-family rents were lower in May 2021 than a year earlier.