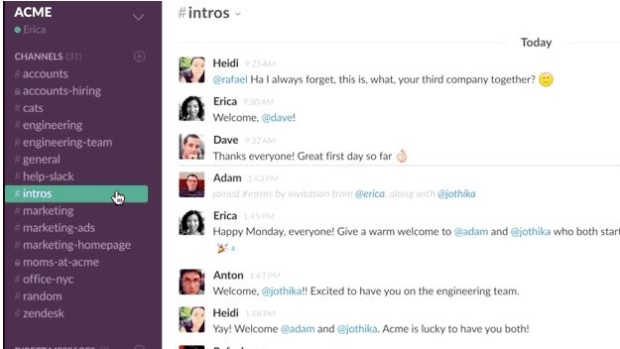 Slack Technologies Inc., which sells workplace chat services, is seeking new funding of about US$400 million or more, according to a person familiar with the deal.

The deal would value the San Francisco-based startup at US$7 billion, said the person, who asked not to be identified because the discussions are private. Slack last raised funds in September, when SoftBank Group Corp.’s Vision Fund led a US$250 million round that valued the company at about US$5 billion. Slack declined to comment on the current funding. TechCrunch reported the fundraising effort late Tuesday.

New investors in the round include General Atlantic and Dragoneer Investment Group, according to the person. Slack has already raised more than US$700 million to develop and expand its popular chat software, which teams use to collaborate at work. The company most recently said that 8 million people use the service daily, 3 million of whom are paying customers.

Slack faces competition from Microsoft Corp. (MSFT.O), which recently made its Teams collaboration service free. But Slack also recently got a boost over a rival. Last month, Atlassian Corp. said it would be shutting down its chat services HipChat and Stride and would be selling the services’ assets to Slack. HipChat and Stride customers would be encouraged, but not required, to migrate to Slack before the services stop working in February. Atlassian also took a small stake in Slack as part of the deal.