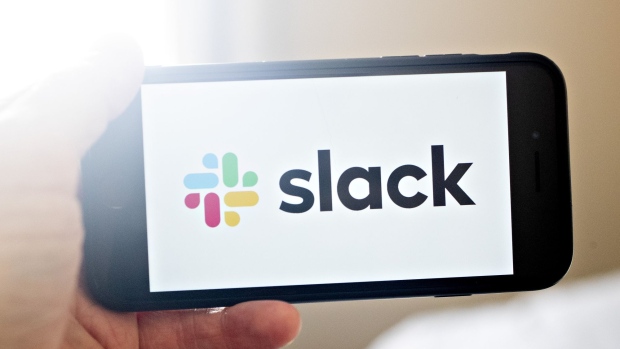 Slack Technologies Inc. signage is displayed on a smartphone in an arranged photograph taken in Arlington, Virginia, U.S., on Tuesday, Sept. 8, 2020. Slack Technologies rose as much as 5.2% for its best intraday gain since August 26 ahead of second-quarter results expected postmarket Tuesday. Photographer: Andrew Harrer/Bloomberg , Bloomberg

Salesforce.com Inc. is considering acquiring workplace chat tool Slack Technologies Inc., according to a person familiar with the matter.

The companies have been holding talks and could announce a deal as soon as next week, the person said. A deal hasn’t been finalized and could still fall apart, the person said, asking not to be named because the matter is private.

Representatives for Salesforce and Slack couldn’t immediately be reached for comment.

The Wall Street Journal first reported on the discussions.

Acquiring Slack, which has a market valuation of almost US$22 billion following reports of the talks, would be Salesforce’s biggest deal ever, according to data compiled by Bloomberg. The San Francisco-based company, led by Marc Benioff, last year acquired Tableau Software Inc. in an all-stock deal valued at US$15.3 billion.

“Smart move by Benioff,” especially if he uses stock, said Anurag Rana, an analyst at Bloomberg Intelligence. “It helps both Salesforce.com and Slack compete more aggressively with Microsoft.”

Slack soared to an intraday high of US$39.73. The stock has fluctuated this year as the pandemic’s effect on businesses has spread to its customer base. Shares plummeted 19 per cent in September after the company’s quarterly billings fell short of analysts’ estimates, as its small- and mid-sized business customers cut spending budgets. The San Francisco-based company went public via a direct listing in 2019.

Salesforce, which makes the U.S.’s dominant sales-tracking software, slid as much as 5.4 per cent. It has climbed about 60 per cent this year for a market valuation of US$227 billion.

Kirk Materne, an analyst at Evercore ISI, said that Salesforce’s shares were down because this was “not the right target, nor the right time.”

“While there is some strategic rationale for this combination, we expect most investors will view the deal as a ‘reach’ in order to buy some growth” in 2021, Materne wrote in a note Wednesday.

Salesforce is hosting its annual Dreamforce conference next week, which will be virtual because of coronavirus restrictions. The event for customers, partners and employees will be a showcase for the software maker’s future products and strategy roadmap. Dreamforce is the largest software conference in the world and Benioff will give his highly anticipated keynote address on Wednesday.

--With assistance from Dina Bass and Katie Roof.