Loans need to increase as businesses are 'failing' as lockdowns continue: CFIB president

The COVID-19 pandemic ravaged the Canadian small business community, leaving a trail of shuttered storefronts and “For Lease” signs in its wake. As the country stares down a third wave of lockdowns, there’s been a growing call from stakeholders for the government to invoke further measures during the upcoming federal budget that will not leave businesses deeper in debt on the other side of the pandemic.

Arron Barberian, owner of Barberian’s Steak House, is among the voices in the community pushing for the government to do more than offer temporary solutions.

“This is a man-made failure right now and the token offering of some money to kind of try and get us through, it’s just not enough,” Barberian said in an April interview. “I would love to see them maybe give us a one-year HST holiday, that’s totally scalable. There are a lot of things they could do, but a little stipend of $40,000 just does not cover anything for just about any restaurant.”

Allison Ruzicka, founder of Headbangers Hair Salon, had similar ideas on how the government can help her business keep up with costs.

“I personally hope to see the government give out more grants to help us out a little bit more and I would like to see them freeze commercial rent because I feel like if they’re giving a break to the landlords with property taxes, they should be giving us a break as well,” said Ruzicka. “And if you’re going to take away my livelihood, I want full compensation for it.”

They’re not alone: many small business owners the CFIB surveyed have similar items on their federal budget wishlist.

When the CFIB released a full report on their recommendations, they also asked business owners which federal support measures would be the most helpful to their business. More than two-thirds (or 69 per cent) of respondents said they would like a 2021 payroll tax rebate to help offset the costs of pension plans and help lower the cost of hiring staff back.

Roughly half of those surveyed are hoping to see measures like reducing red tape so they can operate during a lockdown, receive federal tax and government-backed emergency loan forgiveness, and an extension of existing emergency programs until the end of 2021. 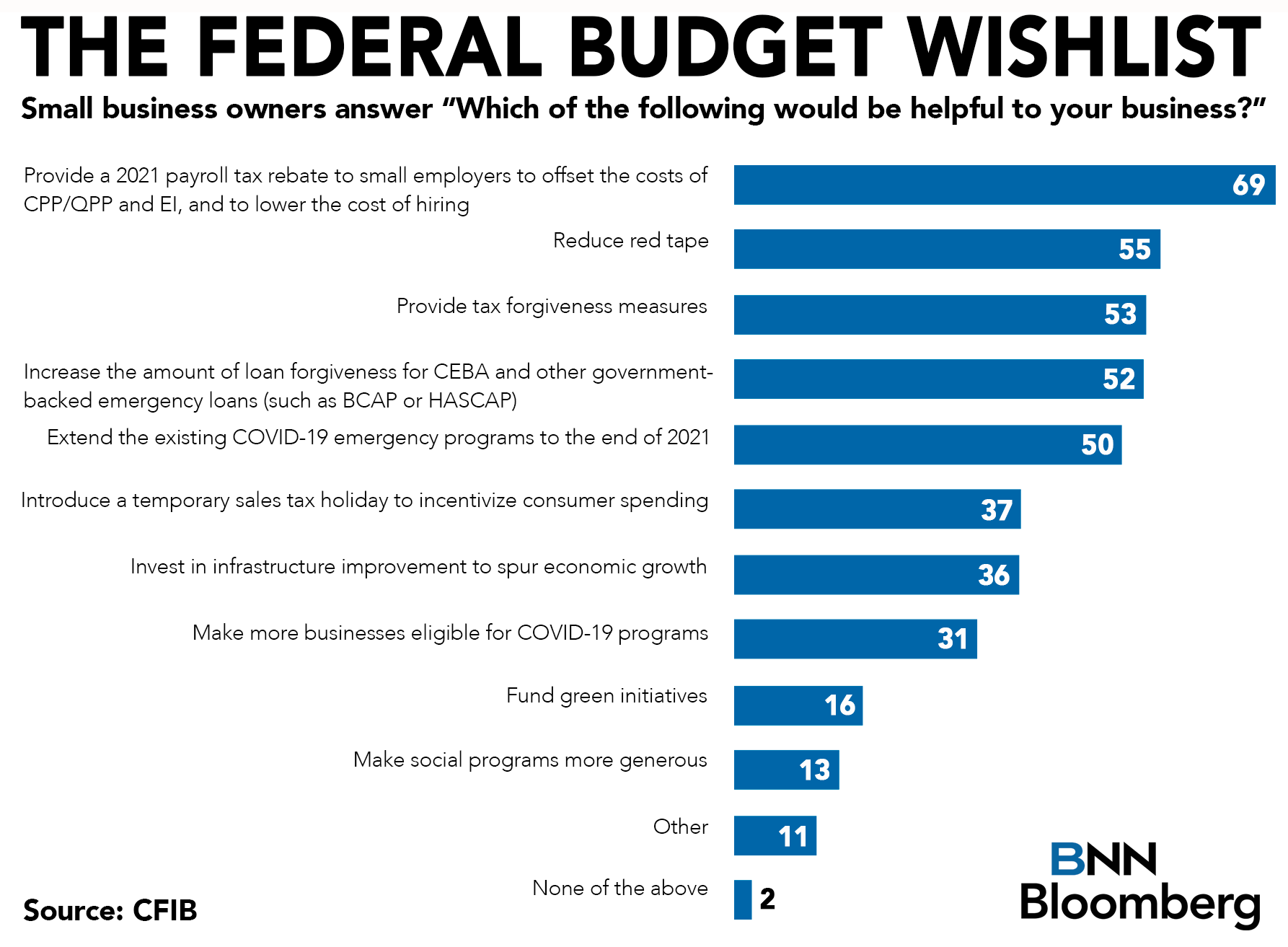 Some of the recommendations outlined in the CFIB report include extending and expanding relief for small businesses into the recovery; placing a moratorium on new costs; forgiving small business debt and extending repayment terms for existing loans; pushing new hiring incentives to help businesses bring workers back; reducing red tape and regulations; and for the government to hold off on introducing new consumer incentives until small businesses have completely re-opened and can more fully benefit from the encouraged spending.

For Corinne Pohlmann, CFIB’s senior vice-president of national affairs, the debt issue is a key sticking point the government must solve, calling it one of the “top three” problems to address.

“Three quarters of business owners have taken on new debt,” Pohlmann said in an interview. “As a result of the pandemic, the average debt is over $170,000. Now, that’s a lot of money for small companies and so, I think we need to find solutions to help them deal with this debt because for many of them, it’s going to be years to get out from underneath it.”

“The other piece of it is… a little bit more flexibility is going to be needed,” Pohlmann continued. “The fact is, the CEBA loan, you have to pay back by the end of 2022 in order to get the forgiveness portion. 2022 is not that far away anymore compared to what it was a year ago.”

Erik Joyal, president of the Ascari Hospitality Group, a Toronto restaurant operator, explained there are far-reaching benefits to the rest of the economic ecosystem when small businesses meet their debt obligations.

“One of the big problems is that the restaurants are also saddled with a ton of debt,” Joyal said in an interview. “That’s a hold-over from the beginning of 2020 where many places will be carrying 60, 70, 90 days worth of payables to their supply chain network. Those suppliers are the ones that are really getting the dirty end of the stick, if you will…”

Joyal added that there hasn’t been a mechanism in place to help small business owners address these mounting debt loads, and thereby remove pressures from the suppliers they interact with.

“I think that’s something that the federal government should really be looking at and taking a long-term view of so that all these suppliers are not saddled with this bad debt that they’ll never be able to get out of.”