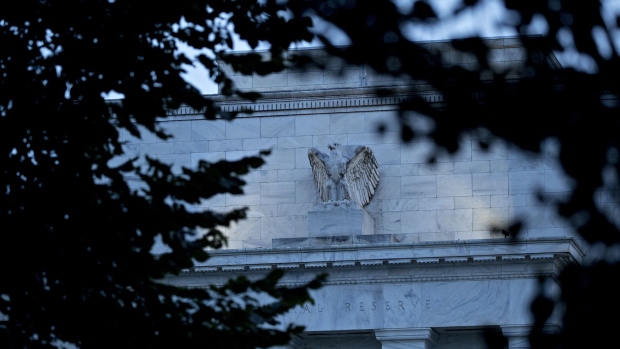 Options on SOFR futures became available for trading Monday, and at least one transaction was done -- a straddle, in which a put and a call with the same strike are bought, anticipating an increase in volatility.

The trade involved the 98.625 strike in December 2020 options on three-month SOFR futures, according to Chris Grams, a spokesman for CME Group Inc., which lists the contracts. Five straddles were traded at a price of 37 ticks, according to several traders familiar with the transactions who asked not to be identified because they aren’t authorized to speak publicly.

The Secured Overnight Financing Rate is a reference rate administered by the Federal Reserve Bank of New York that’s intended to replace the scandal-plagued London Interbank Offered Rate, which is under threat of extinction.

SOFR futures were rolled out in 2018 by CME, whose eurodollar futures contract –- with settlement based on Libor –- remains its most-traded product. CME has proposed that in the event that Libor becomes unavailable, existing eurodollar futures and options contracts will be settled based on SOFR.

A buyer of the straddle benefits from an increase in implied or realized volatility in the underlying futures. In recent months, volatility has increased as the market priced in more Fed policy easing, and vice versa.

CME is waiving fees until June 30 for options on 3-month SOFR futures and is giving a $1 fee credit for each transaction, capped at $30,000 per month.

Bid and offer prices were quoted Monday for several dozen put and call strikes, most of which were within five strikes of being at-the-money, according to a trader. Most of the spreads were 1.5-2 basis points.

At least one major trader said it’s making markets in SOFR options. DRW Holdings LLC, one of the world’s biggest high-frequency traders, is doing so both electronically and via open outcry, according to a spokesperson.