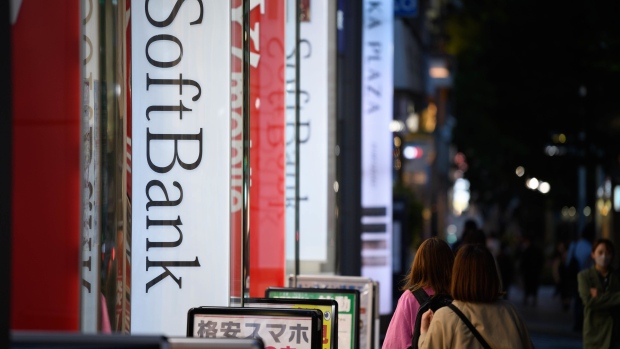 Pedestrians past a SoftBank Corp. store in Tokyo, Japan, on Tuesday, May 10, 2022. SoftBank Group Corp. is scheduled to release its full-year results on May 12. Photographer: Akio Kon/Bloomberg , Bloomberg

LegalForce, which uses AI to screen contracts for loopholes and potential legal risks, said other participants in the round include new investors Sequoia Capital China and Goldman Sachs Group Inc., as well as existing backers Mitsubishi UFJ Capital and Mizuho Capital. The fundraising lifts total amount raised to 17.9 billion yen, the company said in a release on Thursday. The startup has 2,000 clients, including Japanese companies Nomura Holdings Inc. and All Nippon Airways Co. LegalForce said it will use the funds on research and development and on expanding its sales team to win new customers.

SoftBank’s investment in LegalForce is far smaller than the billions the Vision Fund wielded in its heyday, representing founder Masayoshi Son’s new cautious approach. The company logged a record 1.7 trillion yen loss in the year ended in March as a global downturn in tech shares deflated its big bets on companies such as Chinese ride-hailing company Didi Global Inc. and South Korean e-commerce leader Coupang Inc.

Son had previously said Japanese startups grew too slowly for the Vision Fund, as most catered only to the domestic market. But it has since shifted strategy to invest smaller sums and expanded its team at home. Thursday’s investment follows SoftBank’s bets in AI Medical Service Inc., a Tokyo startup specializing in endoscopy; Aculys Pharma, which has rights to develop a treatment for narcolepsy and sleep apnea in Europe; and Soda Inc., which operates an online marketplace for sneakers.